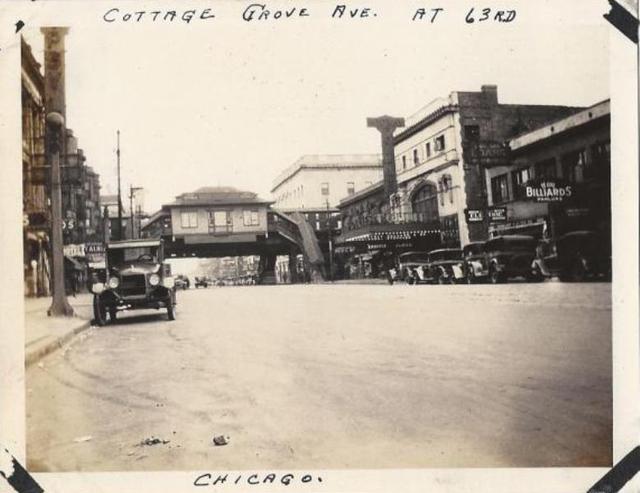 Located in the Woodlawn neighborhood on the South Side on S. Cottage Grove Avenue between E.62nd Street and E. 63rd Street, this theatre originally opened as the Trevett Theatre in 1909 and was a vaudeville house. It was soon renamed Empress Theatre. By 1914 it had been renamed Royal Theatre. The Hippodrome was known as the Midway Hippodrome (due to its proximity to the Midway Plaisance Park) to differentiate it from a couple of other theatres called the Hippodrome in Chicago (such as Marlowe’s Hippodrome and the Lincoln Hippodrome).

It turned to movies in the 1920’s and by the early-1930’s, dropped the “Hippodrome” portion of its name. It continued to operate as a movie house at least into the 1950’s.

The Midway Theatre was also situated about halfway between two of Woodlawn’s premier entertainment palaces, which both were built a bit later, in the early-1920’s; the Tivoli Theatre and the Trianon Ballroom (the South Side “sister” to the North Side Aragon Ballroom). The Midway Theatre has long since been demolished, and today there are apartment buildings on the site.

Does anyone remember the name of the ice cream parlor on 63rd near Cottage Grove that served giant bowls of ice cream in the 60’s?

This theatre would have been very close to the Trianon Ballroom. If anyone has pics of either they’d be greatly appreciated.

I’d place the photo at 1924. The bank building just beyond the tracks was completed that year, the Gypsy Lane dine and dance (marquee visible on the left) was closed by 1928, and the theater itself is presenting ‘Shuffle Along’ on stage, which, after its Broadway run, went on a road tour that year.

As children we went to the Tivoli, Maryland, Ark and the Hippodrone in the1940’s.

The July 17, 1909 issue of The Economist said that a brick theater, 52x140, being built for Thomas Chamales at 6248-6252 Cottage Grove Avenue had been designed by Sidney Lovell.

This was originally known as the Trevett in November, 1909. Soon it was renamed Empress. When the second Empress (on the same Sullivan-Considine Circuit) opened, it became the Cottage Grove Empress. A few years later, it turned to the Midway Hippodrome.

There was also a plan for a West Side Empress and a North Side Empress, but these remained unbuilt.