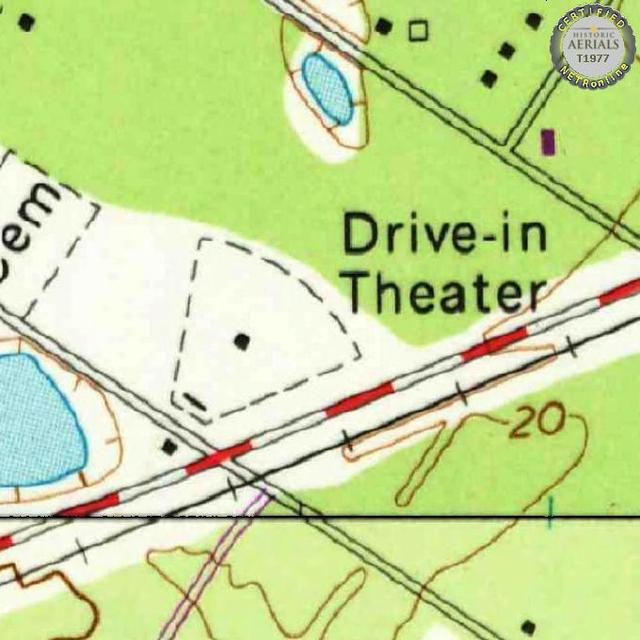 Ernie F. Falgout and Cliff Walker opened the 350-car Tarpon Drive-In on July 3, 1952. The Aransas Pass Progress described it as being on Kenney Lane, midway between Ingleside and Aransas Pass. Its competitor, the 300-car capacity Trail Drive-In had already opened on June 12, 1952 and was initially operated by Chester Kyle, but was taken over by Ernie F. Falgout by 1955.

The Tarpon Drive-In had a neon lit screen tower of a Tarpon fish jumping out of the water. There was playground by the screen. Hurricane Celia demolished the Tarpon Drive-In on August 3, 1970, and owner T.A. Davis built a new plain metal screen tower. It reopened it again in April 1971. In August 1971 Tropical Storm Fern ripped away the screen sheet metal, leaving the rest of the structure intact.

Tom A. Davis managed the drive-in from the mid-1960’s until it closed in 1980. The concession building and marquee stood until 2007. Aransas Pass Boat and RV Storage is now on the site.

Boxoffice, Aug. 6, 1962: “Aransas Pass, Tex. - E. F. Falgout, mayor of Aransas Pass, and C. L. Walker, well-known local businessman, have opened their new Tarpon Drive-In on Farm Road 632, south of town. The massive tilted screen overlooks a parking area which will accommodate 377 cars. The ramp area has been hard surfaced to permit easy access and terracing has been employed to permit full view by patrons in cars. In front of the screen is a well-equipped playground.”

A 1956 aerial shows the Tarpon Drive-in present at the location. Add to that a 1956 topo map that actually has the “Tarpon” name listed (quite rare, as most are simply listed as “drive-in”).

Thanks. Those are excellent reasons for keeping the existing opening date, wherever it came from.

OTOH, I just double-checked my source. (My kid’s college library link to ProQuest. I don’t know what I’ll do for research after graduation, coming later this year. But I digress.) I verified that the first page of the Southwest section of the Aug. 6, 1962 Boxoffice had at its top the headline “New Tarpon Drive-In / Is Opened in Texas” and the story I typed in full above.

So something happened. It was too late in the year for this to be a misunderstood season opener. The same guys who built the drive-in 10 years earlier were lauded for this “new” Tarpon. Shifted location? Probably not; Kenmore is the best at spotting those. Recovery from disaster? Teardown and rebuild? For now, I just don’t know.

Comparing the 1956 aerial to the 1967 aerial shows that the screen was changed from the square to widescreen. That was commonly done in the late 1950s/early 1960s for many drive-ins.

The clues seem to be in the quote from the article you published. “their new Tarpon Drive-In” indicates a rebuild or renovation. Combine that with “The massive tilted screen” which indicates the widescreen and not the older, straight-up square screen and I believe that is what happened.

The rest of the description seems to be “flourishes” which is not uncommon when promoting the re-opening of any business, including drive-ins.

Given that the drive-in is just north of Corpus Christi, it was probably open most, if not the entire year. The rebuilding effort makes more sense in the spring/early summer since that avoids hurricane season which runs from late July to November.

Of course, I can’t say that’s exactly what happened, but I think it’s a pretty good guess.