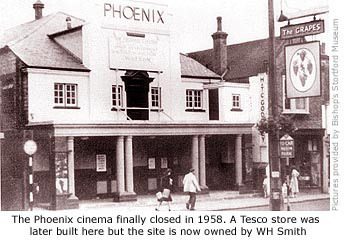 Located in Bishop’s Stortford, Hertfordshire. Built as a Methodist Chapel in 1866, it became a PSA hall which closed in 1903. It opened as the 600-seat Cinema on 10th February 1912. The Cinema operated with a rear projection system. In August 1914 it was enlarged to 700 seats. In October 1916 it was taken over by Ernest Edward Smith. A balcony was added in 1919.

On 9th February 1931 it was equipped for sound films opening with “The Love Parade. A new projection box was built at the rear of the auditorium. The Cinema was badly damaged by a fire in March 1932.

A new cinema was built on the site, opening as the Phoenix Cinema on 23rd September 1935 with Grace Moore in “One Night of Love”. Seating was provided for 600. The Phoenix Cinema was closed on 3rd May 1958 with “Crime in the Streets”. It was demolished and a Tesco Home ‘n Wear store was built on the site, which by 1983 had become a branch of W.H. Smiths, which still operates in 2016.