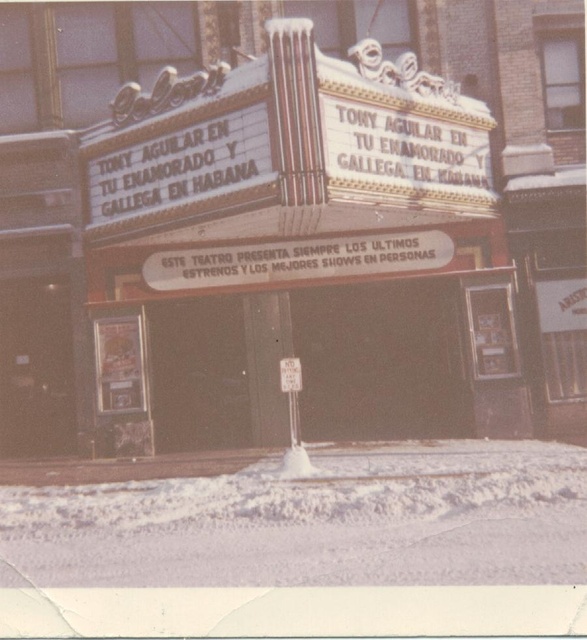 The Colony Theatre was opened prior to 1941. This former Brandt theater later showed Spanish movies up until 1970’s when it burned to the ground.

The John and Drew Eberson archives at the Wolfsonian have a listing for a Colony Theatre at this location dated 1957,which would mean the architect would have been Drew Eberson.

The Colony theater in Union City was owned by my family Orjelick-Theaters. At its peak my grandfather owned 15 movie theatres. Many closed prior to when I was born in 1976. They were small family theaters that usually had 1-2 screens. Many of theaters included spanish films at one time. In an article I found about the Orjelick-Theatres dated June 11, 1987 it stated, “One by one, those theatres went under unable to survive the advent of the suburban multi-screen franchise cinema…By the 1980’s the Orjelick-Theatres had dwindled down to three properties to include the Art Theatre in the Bronx, the New Delancy in Manhattan and the Hoboken Twin in NJ.” The only other theater I remember that my family had owned was called the Coliseum Theater and was located in NY (52nd St & 4th Ave). Best :)

Boxoffice is behaving badly again and Tinseltoes' link is not working (whether temporarily or permanently I don’t know.) Fortunately, the remodeling of the Colony Theatre was the subject of an article in the April 29, 1939, issue of Showmen’s Trade Journal, as well, and here is a scan of it at the ever-reliable Internet Archive. The 1939 remodeling was designed by John Eberson.