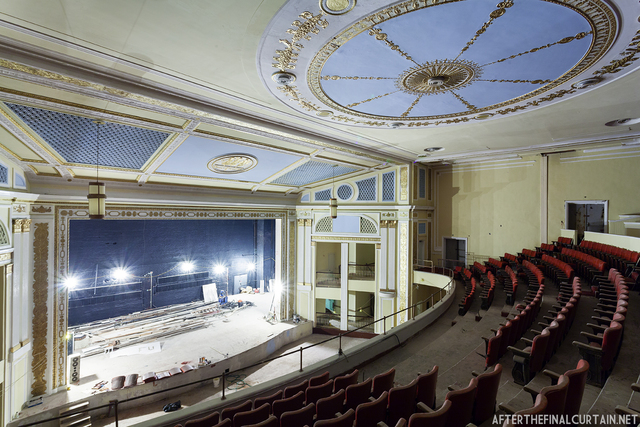 A large 1,894-seat movie palace which takes up a good portion of a city block on N. Broad Street, near Wyoming Avenue in the Logan section of North Philadelphia. The Logan Theatre was opened January 24, 1924 by the Stanley Company of America. The opening movie was “The Common Law” starring Corinne Griffith & Conway Tearle. It was equipped with a Kimball 3 manual 13 ranks organ. It had a large ballroom located on the 2nd floor front of the building which was known as ‘The Waltz Studio’. By 1941 the Logan Theatre was operated by Warner Bros. Circuit Management Corp. The Logan Theatre was closed on January 30, 1973 with Ringo Star in “Blindman” & Paul Winfield in “Trouble Man”. It became a church.

Some of my earliest movies were seen on its imposing single screen– “Ben Hur” and “Moby Dick” among them. Located in a depressed area of Philadelphia, the structure appears intact and may yet retain much of its integrity.

The church moved out of the building in 1992 and it lay vacant for many years. In the late-2000’s the Logan Theatre was purchased by Dr. Owen Williamson and he is currently renovating the theatre as a memorial to his late wife. Current plans are for a live performance/restaurant venue. As of 2012, much of the interior has been repainted in its original colors, the roof has been repaired, building stabilized and electrical and plumbing work done.

I don’t believe this has been linked yet. This post from Hidden City Philadelphia has several photos of the Logan showing the interior renovations as of 2012, most of them paired with vintage 1924 photos of the same scenes.

The text notes that Dr. Williamson bought the Logan in 2005. The church which had moved into the house in 1973 had moved out in 1992, and much damage had been done during the years the building was vacant. The Logan Theatre closed as a movie house in 1972.

Chandra Lampreich, whose pictures are featured in the Hidden City post is a CT member with over 100 pictures posted, you can view them here.

I linked your article to Friends of the Boyd page at Facebook. Not sure that Stanley Warner is part of Time Warner. The studio production facilities, ok, but the historic theaters I think went in another direction to other entities over time.

Yes, the Stanley Warner theater chain was spun off from the studio by 1951. The full corporate history isn’t easy to trace, but in 1967 Stanley Warner was acquired by Glen Alden Corporation, which already owned RKO Theatres and combined the two chains as RKO-Stanley Warner. Some time later another merger created RKO Century Warner, which was acquired by Cineplex Odeon, which eventually sold its US holdings to AMC. By then I suspect that virtually all of the original Stanley Warner properties had been sold off or closed, but if The Saturday Evening Post could trace its history back to Ben Franklin’s print shop then I suppose you can say that AMC is Stanley Warner’s successor.

I’ll revise that then.

I know the owner of this theater. He’s working very hard to get it back to it’s original status

what’s the status with this beauty? looks incredible!

The Logan Theatre closed on January 30, 1973 with Ringo Starr in “Blindman” and Paul Winfield in “Trouble Man.”