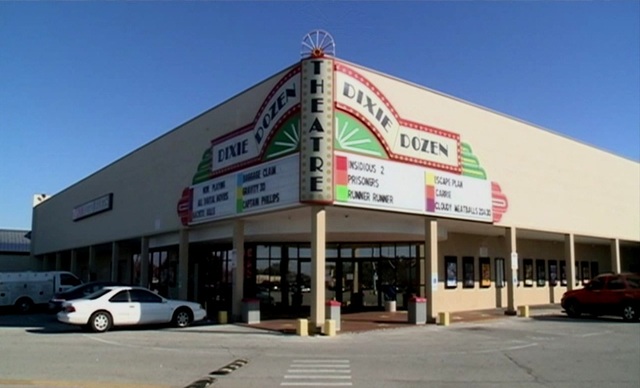 This theater opened May 14, 1993 as part of the recent expansion for the Associated Theatre chain of Louisville, Kentucky. The chain had earlier sold most of their locations to the up and coming Premiere Cinemas of Knoxville, TN.

This retro fit of previous retail space, provided a small but comfortable twelve screen venue with a pizza/play center as part of the complex. This showplace was the only theater location on the westside of Louisville. When Associated Theatres disbanded after the death of it’s principal owner, the theater was bought by a Bowling Green, KY exhibitor.

Since then, the pizza/play center has been removed, six original screens removed and six expanded with stadium seating screens installed. The theatre was closed in 2013 and was demolished by April 2014.

This complex occupies the former retail space of Kaufmann-Strauss Department store in Dixie Manor Shopping Center, located in the Southwest section of Louisville. Kaufmann’s was built in the late 1950s in a stylish International style with clean, smooth lines inside and out. Later, it became an Ayre’s Department store before transitioning to other retail leasing before converted to cinemas. The exterior of the building is still intact, though it is now much less classy in appearance. This southwest sector of Louisville was always underserved by cinemas. Two drive-ins existed, the Dixie Drive-In, now long occupied by a K-Mart store, and the Valley Drive-in, in the far southern quadrant of the county, closed since the 1970s. In the late 1960s, one indoor screen was built, coincidentally at the K-Mart center, called the Alpha One Cinema. In subsequent years two more screens were added, but it has long since closed and converted to retail space. It was a low-end, small, suburban cinema complex, part of a city-wide chain of other Alphas, which have long since closed as well.

My first movie date was with a girl named Bridgitt at the Alpha one. We saw “Top Secret” and after all these years we still communicate. I did catch “Babe” at the Dixie Dozen, though not with Bridgitt.

There was also AMC’s Westland 4 Theatres located a few miles south of the Dixie Dozen on Dixie Highway.

Locals weigh in on the theater here:
http://tinyurl.com/ydpw96y

Mixed reveiws on the Dixie Dozen.

Yep,your moviegoing age is 14 to 24 was the same thing in the seventies,only then we didn’t all these blasted popcorn box sized viewing rooms under one roof and if you couldn’t behave you got tossed out.today,Cops have to play doormen and usher,Sad state of affairs for the theatre business.

I checked the Republic Theatres website and there are no showtimes listed. I was informed that the theatre had closed. It is the first theatre that I have opened that has closed.

Within 3 weeks of this closing, the first theatre I opened in Ohio also closed.