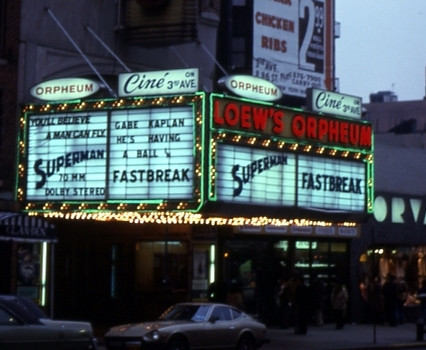 The Loew’s Orpheum Twin Theatre was closed on November 23 1989 and was demolished.

In November 1991, a new 7-screen Loews Orpheum Theatre opened on the site, which remains open in 2010.

Great photo!I was 11 years old when my folks took me to see “Superman The Movie"at this great theatre.It’s one of my best memories of being a kid in NYC during the 70s and 80s.Saw some other classic films there too,including"The Empire Strikes Back”,“Indiana Jones and the Temple of Doom”,“Aliens”,“King Kong 76” and “Top Gun”.At the 3rd.Ave.side of the theatre ,I saw “Prophecy”,“Stir Crazy”,“Superman II”,and “Beetlejuice”.I miss the way this theatre used to be.

Vivid memories of this as a single screen with How the West Was Won in Cinerama, Cat Ballou, Major Dundee in the 60’s then of the twin with both the Orpheum and Cine providing good old school movie going experiences…Among the picture I saw in the Orpheum – See No Evil (after its Music Hall run), Ryan’s Daughter (after the Ziegfeld), French Connection (at least 4 times), The Anderson Tapes…then much later The Abyss (in 70 MM), Farewell to the King, U2 Rattle and Hum, Lethal Weapon 2…At the Cine – Valachi Papers with Charles Bronson, Johnny Handsome, License to Kill

The Loews theatres were in their day at different times Columbia, Paramount, Warner Bros and Universal showcase houses with some Fox product in the 80s and 90s

This theatre never had Cinerama capability.

I want ask a question about this Orpheum. I was reading a 1928 “NY Supreme Court Papers on Appeal” on Google Books that mentioned the following: “…said premises Nos. 152-164 East 87th Street Borough of Manhattan, City of New York, on the EAST IS LOEW’S ORPHEUM THEATRE, which has a frontage of about 155 feet on the southerly side of EAST 87th.” Was there another Loew’s Orpheum on 87th as well as on 86th?

According to the New York Times, the Orpheum also had a “large frontage” on 87th Street and extended the full block.

11/22/63 Stanley Kubrick handwritten note added to gallery, courtesy www.qompendium.com. The special preview of “Dr. Strangelove or: How I Learned to Stop Worrying and Love the Bomb” was postponed for two months.

Back in 2009 I commented that my father recalled that the A.S. Beck shoe store on 3rd Avenue north of 86th Street, which had a marquee and lasted until at least the 1970s, was formerly the side entrance of Loew’s Orpheum. I did a search of the NYC tax photos database and found that the Beck store was there in the 1940s, but just north of it was a side entrance to Loew’s Orpheum. This must have been converted into retail space shortly after the photo was taken, unlike the side entrance to the RKO 86th Street, which remained until the end. Here is a link to an image of the Loew’s Orpheum side entrance: https://nycma.lunaimaging.com/luna/servlet/detail/NYCMA~5~5~170327~530575:1540-3-Avenue?sort=borough%2Cblock%2Clot%2Czip_code&qvq=w4s:/where%2F3%2BAvenue;q:1540%203%20avenue;sort:borough%2Cblock%2Clot%2Czip_code;lc:NYCMA~5~5&mi=0&trs=11