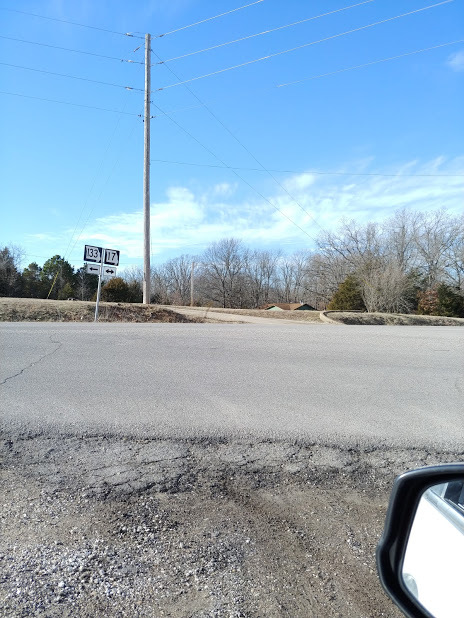 The Crocker Drive-In was opened in 1954 when it was operated by David Forbes. Later renamed Ozark Drive-In, it was still open in 1978.

I know it’s nitpicky, but …

On Google Maps, 13409 MO-17, Crocker, MO lines up with the entrance road that is now the driveway to the home on the west side of the property.

Today, you can just make out the faint hint of ramps, but otherwise there is no trace of the drive-in remaining.

Independent Film Journal, June 25, 1954: “Mr. and Mrs. Dave Forbes started construction of a small ozoner about a mile from the city limits of Crocker, Mo. on the road to Iberia, which they plan to open in early July.”

Motion Picture Exhibitor, Jan. 30, 1963: “Mr. and Mrs. David Forbes, Crocker, Mo., were on the (St. Louis Film) Row recently on their first buying trip of the season. They report that they have completed remodeling and redecorating their concession stand and remodeling the projection booth.”

Boxoffice, Sept. 18, 1978: “CROCKER, MO. - The Ozark Drive-In here was sold by Dave and Ruth Forbed to Dale Routh as of August 7. The sale ends 25 years of operation under the Forbes' management.”

I can image the shape pretty often that it may look a little dense. To the tip of my brain, I can actually find that the road taking that way to the forest mentions the entrance and exit. The entire trace might be a little thick but I’m not sure yet, but luckily we can hope we can reveal it soon.

Information about the Ozark is very tricky to find. I knew that it was demolished in the 1980s, because it was super faded out in a 1994 aerial view which demonstrates extremely faded traces in a B&W photo, but a little bit rumored than what I was expected earlier.