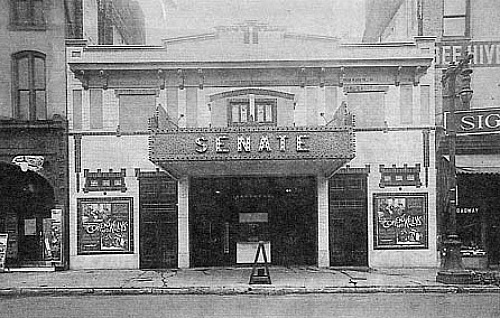 The Senate, which opened around late 1925 or early 1926, was located on Broadway at Chestnut Street. It was noted for its very small balcony and the smell of Pine-Sol from the cleaning of the theater each day. The Senate had some beautiful murals along the walls of the auditorium.

For many years, until its closing in October 1964, it played second run double bills and western movies when they were available. At the end of its run as a theater it was a haven for the homeless that would pay their 75 cents to either have a place to get out of the cold for a few hours or the air conditioning during the summer.

This was part of the Goldman-Plikos Circuit in the early sixties.

Building permit for theatre issued in Sept. 1925, so theatre opened in late 1925 or early 1926—no ads were in paper so exact date of opening is indeterminate.

Architect listed on building permit is A. H. Steel.

Most notable event in theatre’s history occurred in July 1948 when 11 patrons were injured as a wall in a building immediately to the south, which was being demolished, crashed through the roof of the Senate during a matinee.

The Senate closed in October 1964.

The SENATE Theatre ceiling collapse happened at 2:25 p.m. on Thursday, July 8, 1948. An adjoining building’s wall had given way and fell upon the SENATE’S roof. Fifty patrons were in the balcony at the time, some of whom assisted in rescue. One woman was said to be completely covered in brick and mortar, according to patron James Robins who had been seated nearby.