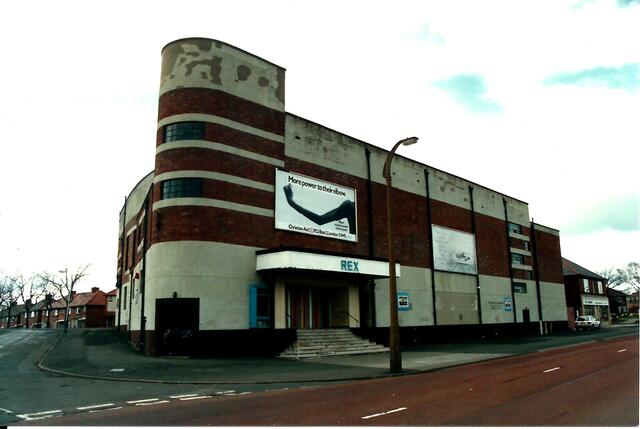 Located in the Chirton district of North Shields, Tyne & Wear. The Rex Cinema was built to serve a new housing estate and was opened on 9th December 1936 with George Formby in “No Limit” & Cedric Hardwick in “Laburnum Grove”. Seating was provided for 904 in the stalls and 402 in the circle. The cinema suffered damage by a German parachute mine on 16th April 1941 when two people were killed. Repairs were carried out and it re-opened on 30th December 1941.

On 27th June 1961 it was taken over by Dorlyn Entertainments Ltd., run by Arnold Sheckman, the half-brother of Sol Sheckman who operated the Essoldo chain of cinemas. From 1963 on Sundays it became a bingo club. Films continued for the remaining 6 days of the week. It became a full time bingo club from 23rd February 1966, also children’s Saturday matinee film shows continued for a while. The bingo club was closed in 1995 and the building lay vacant, becoming increasingly vandalised. It was purchased by the Co-Op Funeral Service and was demolished in August 1996 for a new funeral home to be built on the site.