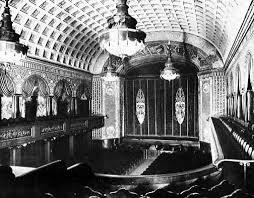 Palladium Cinema was situated next to the Oscar Theatre, Skandinavisk Filmcentral’s first movie theatre. Palladium Cinema had all the means to become one of the biggest and finest gathering point’s for amusement when it opened on 26th December 1918. Professor Olle Hjortzberg and the painter Filip Månsson was responsible for the interior design, and with a Jugend style combined with a scent of classicism, the interior was decorated with marble columns and imaginative wall paintings (Wickman 2003). Some re-occurring motifs were animals and flowers, as well as the church-like atmosphere that surrounded the theatre (Afton-tidning). Palladium Cinema was renovated three times and rebuilt one time. The salon consisted of stalls and a balcony, and had an capacity of 1,240 persons at its prime. However, when Palladium Cinema closed it’s doors in 1987, the cinema only seated 615 persons.

Originally, Palladium Cinema was owned by Skandinavisk Film Central (1918-1922), until AB Svensk Filmindustri took over in 1922. In May 1929, the first sound film in Scandinavia premiered at Palladium Cinema, and in December that same year, the first Swedish sound film “Säg det i toner” (J. Julius and Edvin Adolphson, 1929), was screened. (Waltåsamlingen) Palladium Cinema was the first cinema in Sweden to change to the Panorama screen in 1953. In 1941, the film “Gone with the Wind” (Victor Fleming, George Cukor and Sam Wood, 1941) premiered at Palladium Cinema, and it screened for a record breaking 47 weeks. The basement floor of Palladium Cinema had a white color theme with a touch of gold and art by Nils Asplund hung on the walls. The floor was first meant to act as a cabaret hall, but instead came to be a dancehall named Bal Tabarin. ”Tabban” was opened in the early-1920’s but changed manager in 1931 to the 18 year old mail man Sven Håkansson. Sven was hip and knew what was trendy, therefor he put his money on jazz and dance. He also renamed the place Bal Palais. The basement was until the 1990’s a very popular place for famous musicians like Ella Fitzgerald and The Cure to perform. It wasn’t until they filled the lowered dance platform with water that they had to close the business because of mold. (Wickman 2003)

Both celebrities and royalty made frequent trips to Palladium Cinema. During the screening of Charlie Chaplin’s “The Gold Rush” in 1925, Princess Ingeborg made an appearance. In 1930, the premiere of the first Swedish talkie “För Hennes Skull” saw the lead actors, Gösta Ekman, Inga Tidblad and Håkan Westergren visit the cinema to promote the film. “För Hennes Skull” was also a transitional film, which began the end of silent film showings at Palladium Cinema. Later in 1935, during the screening of SF’s report on Princess Ingrid’s wedding, King Gustaf V made an appearance, which also was his first appearance for a public screening of a film.

On January 25, 1987, Palladium Cinema showed its last film. Today, the former cinema has been converted into a casino.