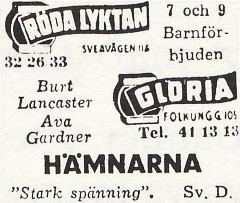 Gloria had four double doors framed by a long canopy with the cinema name in tall neon lights on top. The ticket booth was located by the entrance and three doors at the first floor led to the theatre as well as a stair, which led to the balcony. Its walls were dark brown and bright yellow; the curtain was made out of blood red French velvet. (“Stockholms alla biografer”, Kurt Berglund, 1993). The air conditioning was complimented for its modern and innovative technology; it renewed the air every ten minutes (Biografbladet, nr: 3, March 1938). The sound was evenly distributed throughout the room and you could hear well from any seat no matter the size of the audience.

After its final closing, Gloria was reconstructed and turned into a curtain store, “Ivans Gardiner”, and in 1989 it was turned both into a supermarket “Sparlivs” and a musical instrument store “Södra Bergens Balalaikor” (Olle Waltå, Waltåsamlingarna, donated by Göran O. Waltå 2009). It became a bar and restaurant called “The Bishops Arms” which had closed by early-2018.

Yelpers report the bar here has closed. The Bishops Arms is a chain pub apparently owned by Elite Hotels.