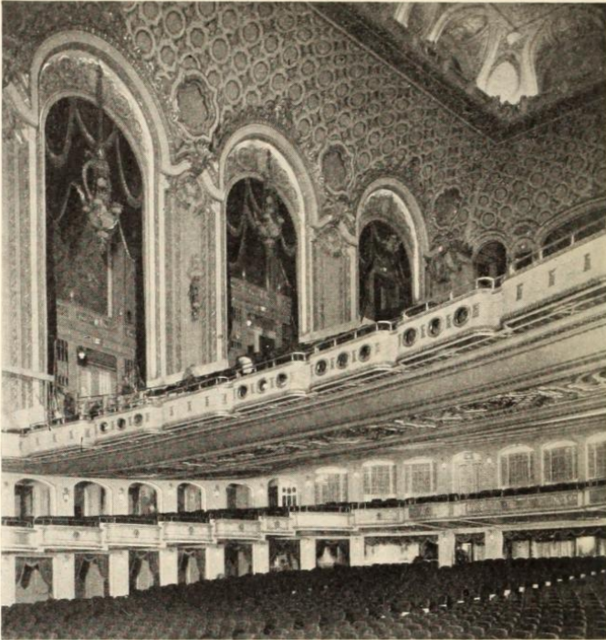 The Paramount Theatre on Times Square opened on November 19, 1926 with Lois Moran in the Paramount Picture “God Gave Me Twenty Cents”, plus a stage show. The Paramount Theatre lobby was modeled after the Paris Opera House with white marble columns, balustrades and an opening arms grand staircase. Inside, drapes were red velvet, the rugs were a similar red. The theatre also had a Wurlitzer 4 manual 36 ranks organ, made famous by organist Jesse L. Crawford and later by Don Baker. There was also an orchestra pit that rose up to the stage level. The ceilings were fresco and gilt. The railings were brass, and the seats plush. There were Greek statues and busts in wall niches. The rest rooms and waiting rooms were as grand as any cathedral. In the main lobby there was an enormous crystal chandelier.

Over the years, many of the top stars performed there, including Frank Sinatra and dozens of the era’s luminaries. After years of showing movies and shows, the Paramount Theatre was closed on February 21, 1966 with the James Bond movie “Thunderball”. The auditorium was destroyed and converted into office space, and the entrance and lobby areas were gutted to make way for office and retail space. The Paramount Office Building also contained two Preview Theatre’s which were designed by architect Charles C. Burton in an Art Deco style. They were in use between 1938 & 1969.

Today, the Paramount Building is occupied in part by the Times Square location of the Hard Rock Cafe.

BTW, I remember George Mann as King Vitamin on the cereal box.

JERRY LEWIS,THE WORLD WILL MISS YOU.

As per CC’s photo posted today I think I remember Sinatra saying, perhaps on Larry King, that when he was in NY he would drive by the Paramount building. Too bad he never got out perhaps late at night and had his picture taken in the area of the former entrance.

Article about closing posted in photos

Mike, what does “(saps)” after the name mean or signify?

It did have that resurrection for “THUNDERBALL” in 1965.

Saps is a play on my last name, also it was my original profile name here, but when I tried to change it a while back, I could only make a variation of it, if I recall correctly.

Frank Sinatra at the Paramount 1944.