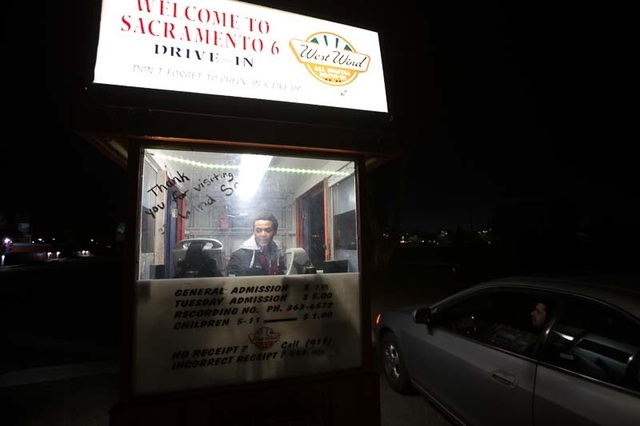 Opened on June 28, 1973 by Syufy Enterprises (now Century Theatres) as a five-screener, a sixth screen was added in 1976.

In a town that once boasted over thirteen drive-ins, the Sacramento 6 is the last remaining operating drive-in in Sacramento (with the exception of the Sunrise Drive-In, which has opened and closed sporatically over the last ten years).

Sadly, this theater, like many Century outdoor operations, was allowed to rapidly decline in appearance and upkeep over several years. Even recorded announcements of titles and showtimes have been nearly impossible to get.

It has now been taken over by the West Winds Drive-In chain.

This drive-in had a 34-week engagement of the original “Star Wars” during 1977-78, which was (tied with the Winchester Drive-In as) the longest drive-in run of “Star Wars” in the United States. And I wouldn’t be surprised if that’s the all-time record for a drive-in booking of any movie. Anyone know of any films that played at a drive-in for longer than 34 weeks?

I was a projectionist at the Sacramento 6 from the ‘80s until the mid '90s (and worked for Century Theaters for a few years after that). We opened “Three Men and a Baby” in November 1987 as a main feature, and as is often the case, it moved to become a co-feature (second feature) after a few weeks. However, it was very popular and stayed as a co-feature for one movie or another, continuously, for nearly a year. I remember my friend (and fellow projectionist) and I were, by summer of '88, amazed every week when we got the bookings that “Three Men and a Baby” was still going to play. I remember it going into late summer/early fall of '88. I don’t think it made it a full year, but it came really close, more than 34 weeks. That was very unusual, but I think there were a few films that rivaled 30-something weeks of play back then.

Even in the recession, this drive-in is doing good business

I have a lot of good memories of the Sacramento 6 drive in. I have been going there since I was a kid and still go with my girlfriend now. To me its better than a regular theater because if the movie sucks you still get to enjoy a beautiful summer night outside and the drive-in makes bad movies more bearable. I’ve seen some classics here (Jurassic Park, Waynes World, Back to the Future II & III) and some not-so-classics (Super Mario Bros. The Movie, Richie Rich, The Flintstones Movie).

I was lucky to get a behind the scenes look at the drive in in 2004 when I was working for a local radio station, KWOD 106.5, and we did a couple classic movie nights at the Sacramento 6. Back then it was thought that the Sacramento 6 was closing for good and we we’re throwing it a going away party. We had local rock bands playing there, free double features, people showed up by the truck loads! Little did we know our going away party wouldn’t really be that because almost 10 years later its still going strong even in the winter months. But in the summer the lines have been known to be backed up to the busy street and over the Highway 50 overpass. I know one day it will be gone but from the looks of it that might not be any time soon.

just went here yesterday! the food was good! and the quality of the image on the screen is even better than my local walk-in theater! it was an opening premier movie too! the grinch!

Did you smell the fires?

yes. the next day left for home and it reeked of smoke. it was so bad that when got in the car. it reeked of soot from our clothes. it was smoky for all of the day getting worse as the day got on. literaly just about every middle school elementary school and high school and college within 100 miles from the fire was closed!

Opened on screen 1 with “Scorpio” and “Live and let die” and screen 2 with “Song of the south” and “Walt Disney’s The Aristocats” and screen 3 with “Fuzz” and “The Poseidon adventure” and screen 4 with “Joe Kidd” and “High plains drifter” and screen 5 with “Rage” and “Last of Sheila”.