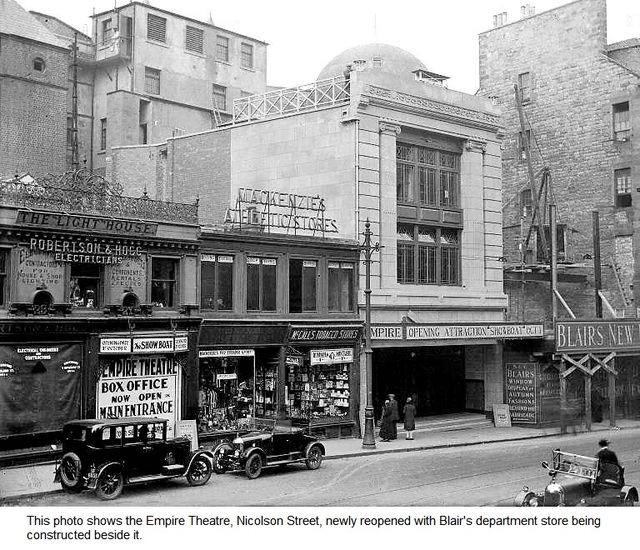 The Empire Palace Theatre was opened on 7th November 1892 as a variety theatre. It was built for for Sir Howard Edward Moss, head of the Moss Empires Ltd. chain. It was designed by noted theatre architect Frank Matcham in an Oriental style. Originally it had a seating capacity of 3,000. Pantomimes became an annual event from 1893. The Empire Palace Theatre became the first venue in Scotland to screen moving pictures when on 13th April 1896 the Lumiere Brothers presented their Cinematographe Lumiere films as part of the variety bill. On 9th May 1911 during a performance of The Great Lafayette-The Man of Mystery, a fire broke out on stage, killing Lafayette and ten backstage workers, plus a horse and lion which were use in his act. The stage and dressing room block were the most damaged in the fire, and architect Frank Marcham was employed again to rebuild them and restore the remainder of the theatre. It re-opened in August 1911.

The Empire Palace Theatre was closed in November 1927 to be largely rebuilt to the plans of architects William Milburn & Thomas Ridley Miburn. The new Empire Theatre was opened on 1st October 1928 with “Showboat” which ran for three weeks. The seating capacity had been reduced to 2,016 in stalls, grand circle and balcony levels. In August 1933 work was carried out to give the theatre a new decorative scheme and to improve the accoustics and it re-opened as a twice-nightly variety & revue theatre. Over the years top names starred at the Empire Theatre, including:Max Wall, Morecambe & Wise, Harry Worth, Judy Garland, Tony Hancock, Jack Buchanan, George Formby, Chico Marx, Charles Laughton, Bruce Forsyth, Johnny Ray, Rudolf Nureyev, Roy Rogers & Trigger and in April 1954 Laurel & Hardy.

The Empire Theatre was closed in 1962 and was sold to Mecca to become a Mecca Bingo Club. By March 1963 it was the New Empire Casino (still operated by Mecca). The bingo club was closed in 1992.

The theatre was purchased by the Edinburgh Festival Theatre Company who were looking for a permenant home. Architectural firm Law & Dunbar-Naismith Partnership drew up plans to remodel the exterior of the building with a huge conclave glass structure, rebuild the backstage area and refurbish the auditorium. The Festival Theatre re-opened on 18th May 1994.

In 1997 the operation of the theatre was merged with the King’s Theatre, both being managed by Festival City Theatres Trust. It hosts several festivals throughout the year, including production for the Edinburgh International Festival. It is equipped to show films and was used for the Edinburgh International Film Festival from 2010 when it had the UK premiere of Disney-Pixar’s “Brave”.

The Festival Theatre is Grade A Listed.

Photos of the auditorium here:–