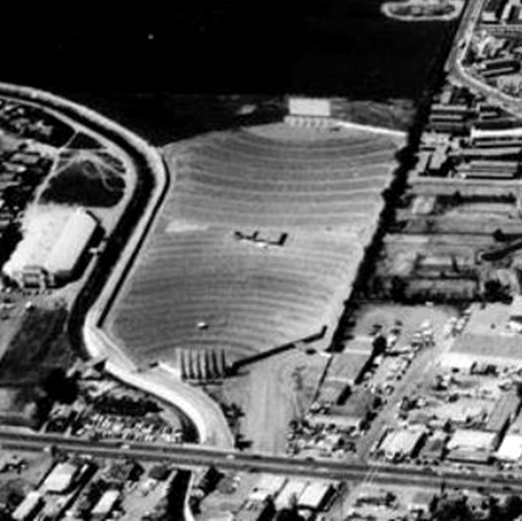 The Alum Rock Drive-In was opened in 1950 when it was operated by Andrew Sasso and General Theatrical Co. It had a capacity for 500 cars. In June 1960 a second screen was added and it became the Tropicaire Twin-Vue Drive-In with an increased car capacity for 1,000. It was closed in 1975.

Launched in 1950 as the Alum Rock Drive-In. In June of 1960, it was sold to El Rancho Drive-In which spent $450,000 to add the second screen and giving the theatre a tropical theme created by designer Gail Santocono who also did the La Habra Theatre. Manley cafeteria, Midway playground equipment and a mini-train were among the other improvements for the April 1, 1961 rebooted Tropicaire Twin-Vue Drive-In Theatre.

Boxoffice, Nov. 28, 1960: “Modernization bids are being taken for the old Alum Rock Drive-In on Alum Rock avenue. The theatre, when renovation is completed, will be known as the Tropicaire Drive-In.”