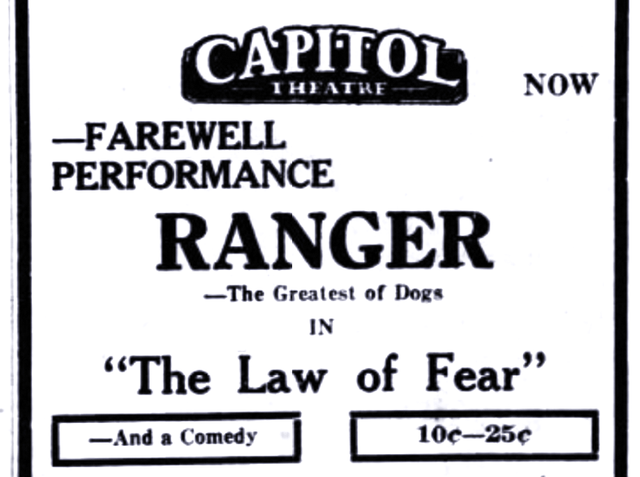 The Capitol Theatre was a silent era Great Falls house with several predecessors. On October 9, 1906, Connor & Pomeroy launched it as the moving picture, Bijou Theatre. Reviews of the auditorium were harsh for the day calling its narrowness more suitable for a bowling alley. On August 27, 1911, the three-year old Orpheum Theatre took on the Bijou Theatre closing its former Great Falls location and operating with vaudeville.

On November 14, 1913, the Crescent Theatre took over for the Orpheum Theatre continuing vaudeville but quickly closing March 8, 1914. On April 10, 1914, Pat Sexton took over calling the venue the Sexton Theatre. Sexton changed the programming back to film which continued to the location’s final day.

On July 1, 1921 Jensen & von Herberg of Seattle who operated the Liberty Theatre (and, later, the Alcazar Theatre) in Great Falls took over the Sexton Theatre renaming it the Capitol Theatre. They launched with “A Small Town Idol”. That theatre lasted as a silent house until July 5, 1928 when the building was purchased for other retail interests. The final show was Ranger, the dog, starring in “The Law of Fear”.

There is no Main Street in Great Falls. The Capitol Theatre was on Central Avenue.