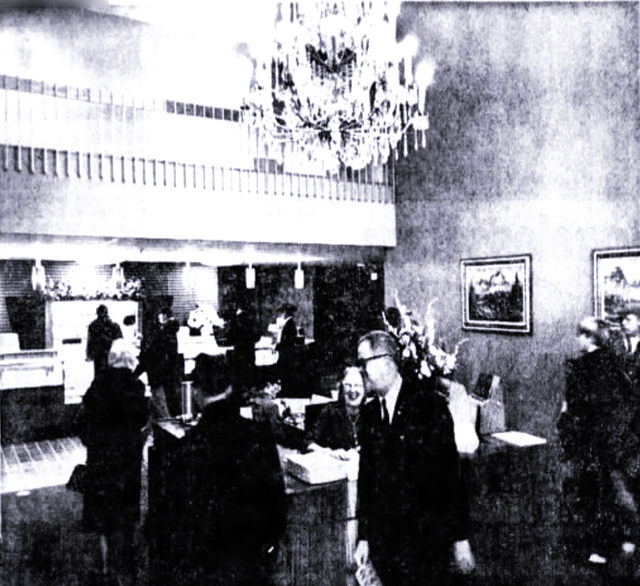 The Holiday Village Shopping Center was built in 1957 theatreless. The Fox Holiday Village Theatre was Fox Intermountain’s effort to launch a theatre outside of its downtown Liberty Theater. The 796-seat theatre was planned in 1965, drawn up in 1966. It was essentially a replacement for the shuttered Rainbow Theatre.

The Fox Holiday Village opened on December 21, 1967 on a thirty-year lease showing, “The Bible” following an open house the night prior. Meanwhile, the shopping center was enclosed with most stores falling within the mall. The theatre was modernized and reduced to 600 total seats.

Following Fox Intermountain, subsequent operators were Mann Theatres and Carisch Theatres. The theatre had the World Premiere of Katherine Hepburn’s “Olly Olly Oxen Free” with director Richard A. Colla in attendance on April 25, 1978. It did stellar business with “Jaws”, “Star Wars” and “Return of the Jedi” though the Twilite Cinema Center had “Empire Strikes Back”. It was also sensurround-ready for “Earthquake”.

With the lease about one-half complete, Carisch Theatres was trying to figure out what to do with the aging one-screen theatre in a multiplex world. They conceptualized concepts including putting in an indoor water slide in or opening a pizza/gaming location. But Carsich Theatres simply operated through the summer of 1988 before closing it. The single-screener had one more shot. Under a short run of several months with the Excellence circuit, the Fox Holiday Village Thetare was closed on January 12, 1989 playing “Twins". The theatre was boarded off for the remainer of its lease while the mall considered future uses.