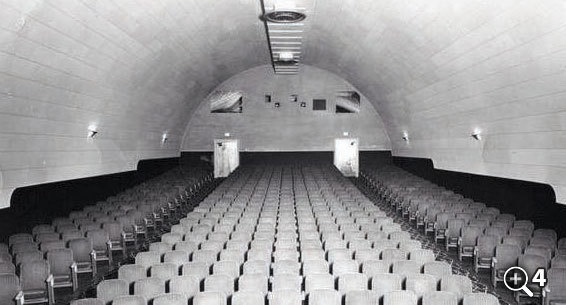 The Roxy Theatre was built in 1948 after fire destroyed the adjacent Palace Theatre (Opera House). The theatre was constructed in two sections; the front section is an attractive frame and brick with a wrap-around neon-lighted marquee and a small, attractive vertical sign, and this section housed the box office and lobby with a refreshment counter. The auditorium is a corrugated steel Quonset Hut style. The Roxy Theatre was home not only to film but also to performances by the local symphony orchestra and special live Christmas shows. Located on Coleman’s main street, the theatre was an integral part of the small town’s streetscape.

The Roxy Theatre was built on the footprint of a two-story wooden building housing “The Palm”, a shop that sold fresh fruit and ice cream, served light lunches, and specialized in its oysters. The Palm operated from 1908 until the building was destroyed in 1948 during Coleman’s worst fire, which claimed six buildings including the Palace Theatre (Opera House) next door to the east. The Roxy Theatre was itself damaged by a fire in 1950 but was repaired and reopened.

Though the Roxy Theatre has been closed for years, the theatre lobby was the setting for “Angie’s Diner” in the drama “Angels Crest”. The original front doors give away the theatre’s original purpose, the “Refreshments” sign is visible over the fictional “Angie’s Diner” counter, on the opposite wall is seen a large “Roxy Theatre” mural, and a short row of theatre seats is visible near the front doors.

Renovations and funding had begun by 2021 to converted the theatre into a multiuse performing arts centre. Click on the theatre website for more details.

According to the Alberta Registry of Historic Places the street address to this building is 7738, not 7724 as listed here.