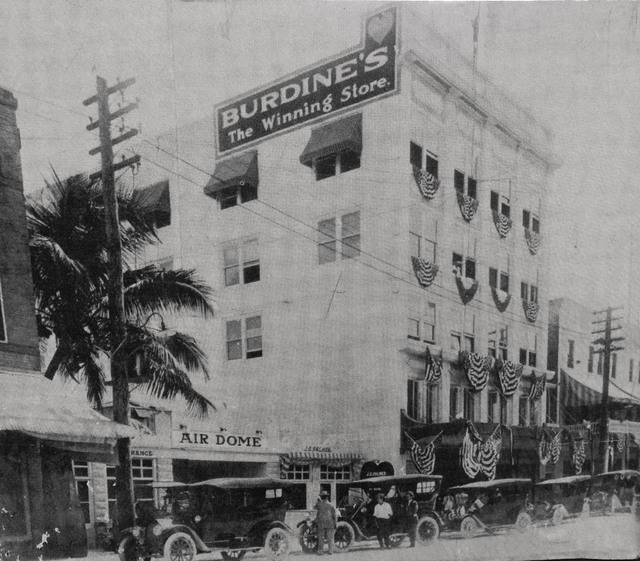 This Air Dome was a theatre built by Captain Frank Jaudon and his brother Ivan who had reopened Kelly’s Theater in an adjacent space as the Arcade Theater in 1912.

According to Isidor Cohen the theatre was replaced by the Kress Building by 1925 when his local history book “Historical Sketches And Sidelights Of Miami, Florida” was published.

In 2017 the space where this Air Dome was has been a vacant lot since the most recent building there was demolished in 2008.

Other theatres by the name of Air Dome existed at 174 E. Flagler Street in the early years of Miami movie-going.

See the Cinema Treasures page for the Arcade Theater for related information.

Compare the historic photo to the present day Street View image for a look at now versus the 1910’s, with the Burdine’s/Macy’s building still present.

Cinema Treasures page for The Arcade

A paragraph on page 75 of the book “A Journey Through Time: A Pictorial History of South Dade” by Paul S. George says this Air Dome was forced out of business after Burdine’s sued the City of Miami for not enforcing its codes against flammable building materials before the Air Dome’s retractable canvas roof caught fire in 1915 and damaged the department store. The City then condemned the roof and the theater closed, was disassembled, and moved by railroad in 1916 to become the first Seminole Theatre in Homestead.

A Miami Herald article refers to the Air Dome that was moved as being at 174 East Flagler Street, which would be the first of the two mentioned on this Cinema Treasures page.

Other sources that do not mention a fire say the Air Dome that was moved was remodeled into a two story Colonial Theater before being disassembled.

See this Cinema Treasures page about the first Seminole Theatre for more.

Mr. Cohen’s book does not mention a fire, the Colonial, or a theater being moved anywhere, but then his chapter is about the early “development” of cinemas in Miami and may not have been intended to be a complete history of everything that happened.

Macy’s has announced that its location shown in the historic photo, that first opened as the Burdine’s department store in 1898, will close in 2018:

Perhaps the building will then be altered and become unrecognizable compared to the historic photo, or it could be demolished with a new structure expanding into the empty lot where the Air Dome had once stood.