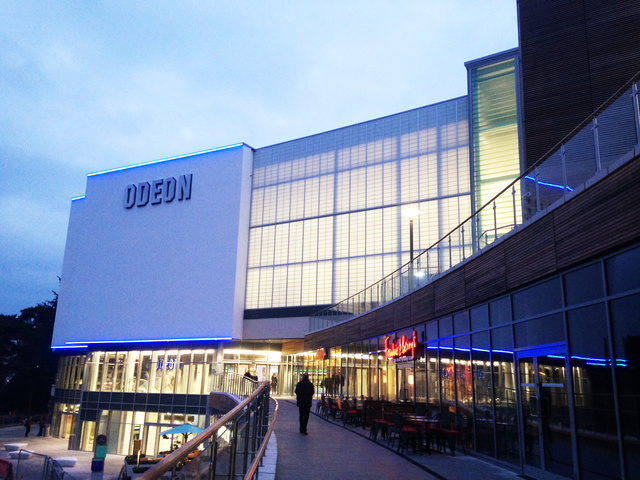 The Odeon Bournemouth BH2 was opened on 10th February 2017. Built on the site of a former car park and bus station, it is located inside the new BH2 Leisure Centre. Seating capacities in the screens range from 340 down to 42.

Since this new odeon bh2 opened with the closing of the nine screens at westover road operated by odeon that took ownership of ABC, total of nine screens,over 10 screens at the new bh2, makes no logical sense. The more things change. The more they stay and remain the same.

The bh2 is not all that great. The larger seating in one of the screens now looks jaded with fake plastic leather peeling off the seats.

Auditoriums have a sharp echo reverb located at the front of one of the auditoriums I tested in screen 6 which is a smaller screen. The echo pinged between two hardboard surfaces that had 1mm black cloth. Further along the walls where the absorbent was bit more thicker reduced the echo.

I placed my camera phone at front of screen 6 and clapped my hand while walking up the stairs and back down again. On replaying the video at home I was able to tell this isn’t a good sounding odeon bh2, that it has all been hyped up for.

The isense screen 10, I’ve not fully tested it for echo at the front. I did one time while seated in the first middle row front (hard to say if its a circle?) I clapped my hand and guessed about around 1.4s or so before the clapping sound decayed.

The sub bass seems, well meh, I felt light-years better at the CIC High Wycombe THX or the CIC Empire Leicester Square, THX. The sub bass has a depth but nowhere near or close to the THX status.

The overhead surrounds look tacky with dangling them from the ceiling makes dolby atmos look like a discotheque of the 1970’s. Its tacky to just have speakers in large room, larger than homes and they couldn’t conceal hide them flush in the ceiling.

I walked around the auditorium to see what a customer is getting for the odd few million per screen?

Does the isense atmos have five screen? From seeing one of the construction pictures makes it appear so from the scaffolding behind the screen thou they could be sub bass in the Lc Rc position? I had peek behind the screen thou not good enough to see with the touch if any subs was laying on the floor which is usually typical. I didn’t see any so I have to assume the subs are located on the scaffolding stage with LCR. Next time, I ng have a more thorough look cos, I like to know where speakers are located, if I was paying to watch and listen I like to know?

So how does the isense atmos sound, really? My honest really? It sounds dreadful!I not really been able to localize any decent sound effects, yet with seeing three movies or hard-drives downloads?, Yet. The whole playback sounds DEAFENING and anyone that doesn’t have idea that this can lead to hearing issues. I have on all three occasions had to wear my earplugs.

The HF horns if they are using a three-way would be mid/high HF is sheer DEAFENING!! From what I can see on the SPL dB on the phone app, thou I prefer to use my Realistic analogue SPL, if I can remember to take it with me next time? I’m almost certain odeon are not complying with 85dbA peak as mids and highs are so close to hurting my ears.

The whole odeon policy of showing its movie/hard-drive video projector wall. Is lousy. I have been to odeon Leicester Square and never been once impressed with 1993 Last Action Hero, 70mm or with digital projection, Leatherheads.

The pre-show starts with looped music that sounds like it belongs on youtube under, AMSR. What is that trying to do brainwash or hypnotize me? Cos it ain’t working.

It’s all auto-sourness-mated system with projection on one level floor with bundle of Crown amplifiers and I think nec or barco projector and Dolby CP850 that is geared up for I think almost the full atmos 64 channels or maybe under, not that it matters cos the atmos re-recording/producer/director mixes ain’t all that good. Lifelike, yeah sure it is.

I actually walked out of disney marvel ‘eternals’ as the atmos mix of an london earthquake scene actually offended me. Is this it? is this all the atmos can do for an earthquake scene besides being too DEAFENING loud on mid/high HF horns. Is that all the LFE.1 bass it can do? I felt better with THX and Sensurround and I’m paying £16.00 pounds for this? I just walked right out of the movie after 15 so minutes and looked around the other screens playing or empty to see what I actually get for £16.00.

“My colleagues (friends) believe they are wasting their time with me.”

matrix 4? In dolby DEAFNESS. They’d have to drug me and drag me to see that in decemeber. I will be wearing Ear Defenders and would take my camera gear DLSR get better pictures and this, this would be the last time as its waste of £16.00 and no THX, well at least the speaker PA system is JBL.

BH2 is covered in the June 2017 issue of Cinema Technology.

Projection is NEC; NC3240 in the iSense (or is that isense? Odeon don’t consistently apply capitalisation, and it turns out that both variations have been filed as trademarks by them…)

The speaker system specifications are not included in that article.

However, the screen speakers for the similar and almost contemporaneous Odeon Orpington iSense are:

(The Orpington iSense is covered in the September 2016 issue of Cinema Technology.)

Obviously it would be different in BH2 given that the speakers are from JBL, but the above should be indicative of the likely specification.

Per Dolby Atmos theatrical guidelines, LFE speakers are installed in one cluster on the floor behind the screen (for mutual coupling.)

The standard material up to stretched fabric level is an “acoustic carpet” product (or that’s how it’s marketed, it’s like hard wearing car carpet in appearance.)

Was the carpark that used to be there for the bus station?

davidcoppock: The car park was open to the public:

I’m slightly puzzled by the reference in the description to a bus station being on the site. Using the “Historical Imagery” function of the desktop version of Google Earth to look at aerial images dating from before the leisure complex was built, I can see only a flat “surface level” car park.