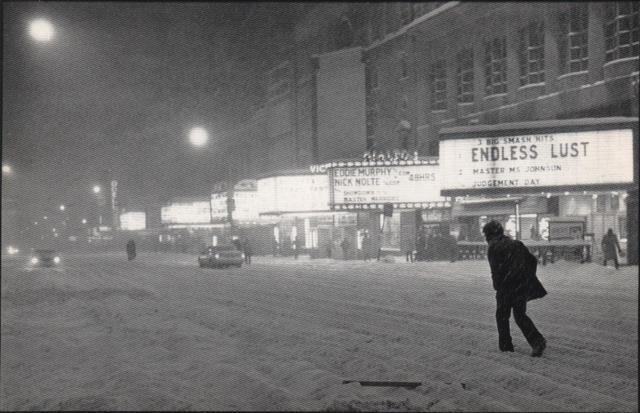 The theatre was also outfitted with a TV studio that was used by everyone from Gerald Rivera to Montel Williams.

The theatre’s fortunes were often in sync with the vitality of Times Square for better or for worse. By the 1970’s, the Rialto Theatre became an adult house and then clung to life for the next two decades, finally operating as the Cineplex Odeon Warner Theatre from 1987 to 1990.

Finally and sadly, the theatre was razed in 1998 to make way for the 30-story Reuters building.

The Rialto is following tradition this week in celebrating a quarter of a century of purveying movies to the public with a new screen-and-squeal item, “The Black Cat,” a comedy thriller suggested by a Poe short story…

This should have a Previous Name listing as Brandt’s Rialto, which was used for much of its existence.

It was also a legit house in the early 80’s that housed Blues In the Night with Leslie Uggams. After thirteen previews, the Broadway production, directed by Epps, opened on June 2, 1982 at the Rialto Theatre, where it ran for 53 performances. Jean Du Shon, Debbie Shapiro, Leslie Uggams, and Charles Coleman comprised the cast. The show was nominated for the Tony Award for Best Musical.

The mortality rate in “Night Monster” is pretty high, even for the type of chiller drama the customers of the Rialto have become accustomed to over the years at the self-styled “house of horror.”

1961 photo added courtesy of the Americas Past In Photos Facebook page.

In the photo posted as 1978 photo courtesy of Al Ponte’s Time Machine The sign says Rialto 2.

David, the Rialto 2 had an entrance on 42nd street and was in the basement of this same theatre. Once inside you could go from one to the other without being harassed. There is no reason to remove the 42nd street photos since this was basically a twin with two boxoffices and two entrances until Cineplex Odeon mothballed the fully remodelled twin two due to subway noise.

OK. I will delete the above post, and re-add the 3 I had removed, and identify them as 42nd Stret entrance.