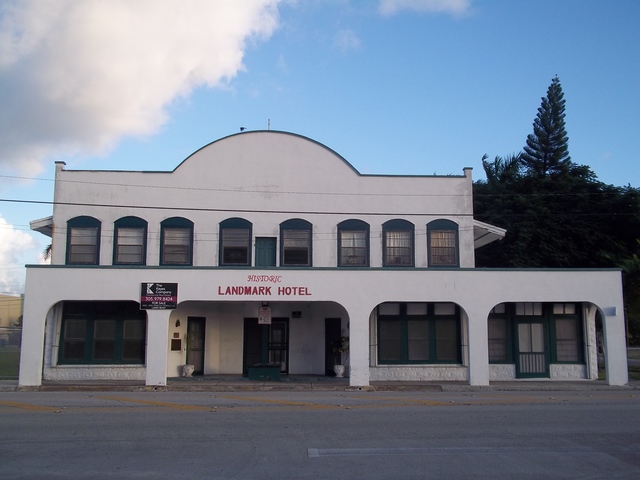 What is now the Landmark Hotel building began its life in 1912-13 as an open-air cinema called the Air Dome on E. Flagler Street in downtown Miami.

In 1916, it was disassembled and moved south via the Florida East Coast Railway to Homestead and reassembled at 55 S. Flagler Avenue.

A Miami Herald article that includes some history of Homestead’s theaters says the Air Dome had been located at 174 E. Flagler Street, which would be the first of the two Airdomes indicated on Cinema Treasures as having existed at that Miami address where the Olympia Theatre is now.

One version of the Landmark’s origin story, however, found on page 75 of the book “A Journey Through Time: A Pictorial History of South Dade” by Paul S. George, describes the Air Dome that was moved as being the one next to the Burdine’s department store (at 30 E. Flagler Street on Google Maps). He says that theatre’s retractable canvas roof caught fire in 1915 and damaged the store, which then sued the City of Miami for not having enforced its codes against flammable building materials. The City then condemned the roof and the theater closed, then moved.

Another version in the City of Homestead’s history brochure “Homestead Then & Now”, and an online article by local historian Larry Wiggins called “17 Must-Visit Historic Treasures in Homestead and Florida City”, does not mention a fire or the Air Dome’s address but states in 1914 it was turned into an “enclosed two story structure and renamed the Colonial Theater” before it was moved.

One account from Bob Jensen, president of the Town Hall Museum in Homestead, in the Miami Herald article, adds it then opened in the new location as “the Homestead Garden Theatre, [and] sometime between 1916 and 1919, the movie theater changed names becoming the Homestead Movies”.

These sources then agree it became the Seminole Theater in 1919. The “Homestead Then & Now” brochure indicates this occurred when James W. English purchased it, “converting the second story into bedrooms to relieve overcrowding from local boarding houses.”

In 1921 Mr. English opened a new Seminole Theatre at 18 N. Krome Avenue where the Seminole Cultural Arts Theatre is now, and the first one ceased exhibiting films to become the Seminole Hotel.

The remaining theatre space in the former cinema was remodeled into hotel rooms in 1936 and the establishment included a cafe. In 1965 new owners changed the name to the Landmark Hotel.

In his article Mr. Wiggins observes: “The wide eaves and high windows on the building’s sides are remnant of the early days of silent movie theaters before air-conditioning. They allowed the heat of the projectors to escape while blocking light. Today [the Landmark Hotel] operates as a rooming house.“

The Miami Herald article “Homestead’s Historic Seminole Theatre: Restored and Once Again a Community Treasure” about the Seminole on Krome Avenue, including some history of Homestead’s theaters, such as the first Seminole and the Ritz.

Cinema Treasures page for the Air Dome next to Burdine’s that Paul George says was moved to Homestead.

Cinema Treasures page for the Airdomes that were at 174 East Flagler Street where the Olympia Theatre is now, the first of which may have moved to Homestead. I vaguely remember one or two other people over the years beyond the Miami Herald article assume that this was the one that was moved.

I’m supposing the Seminole Theatre would be Homestead’s first cinema, since I have not heard of any previous.

I’m not completely sure what the Landmark Hotel building is really used for now. I do not see a way to reserve a hotel room there online, and did not when I once looked for hotels in Homestead a few years ago. Larry Wiggings’ article says “it operates as a rooming house” at the time he wrote it. I’ve found a recent real estate webpage listing the property for sale as a hotel, with a note not to disturb the residents. Meanwhile someone has created a Facebook fan page calling it the Seminole Cafe and Hotel Landmark & Historical Place.

If you are driving south down US-1 from Miami to Homestead, you are parallel to the route of the former Florida East Coast railroad right-of-way, now the Metrorail and Busway, once used by the train that transported the disassembled Air Dome/Colonial to its new home.

As I post this, I am gazing out the window of a Starbucks across US-1 at the space under the elevated Metrorail tracks that used to be the railroad, where, for a moment, the theater passed by 101 years ago.

Check out this article by Bob Jensen in the South-Dade News Leader from December 11th, 2015:

It says the Air Dome that was relocated from Miami that became this Seminole was the one next to Burdine’s.

Wow, Mr. Jensen says “The last time I was in the lobby [of the Landmark Hotel] the ticket booth could still be seen.”

New to me, the article says the first films exhibited in Homestead were shown at Sistrunk Hall in 1913 (the article includes what is believed to be a photo of the building), a wooden structure that had existed on Mowery Drive where Showbiz Cinemas is now building Homestead Station down the street from the Seminole Cultural Arts Theater.

An article on the Historic Homestead Town Hall Museum website from May 2, 2017 says:

“Sistrunk Hall was where various fraternal orders and community groups met and it also had a movie theater which pre-dated the Seminole Theater. Sistrunk Hall, like so many other wooden buildings of that era, burned down in the early morning hours of August 31, 1916.”

I have uploaded photos of the Seminole Theater/Landmark Hotel building (which seems to be for sale), as well as one of its historical marker.