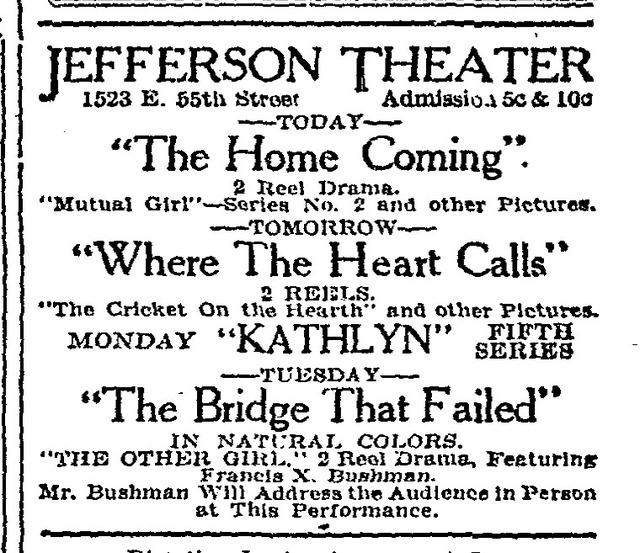 Opened prior to 1904 as the Hyde Park Theater. It became a vaudeville house renamed Jefferson Theater in 1910, and was located in the Hyde Park neighborhood, on E. 55th Street, near S. Lake Park Avenue. It could seat over 650. It later switched to movies, and operated until 1929. It has long since been demolished.

It’s likely that the Jefferson Theatre was in operation, perhaps under a different name, prior to 1910, and I suspect it was called the Hyde Park Theatre. This item in the January 1, 1910, issue of The Economist said that a theater on 55th Street and Lake Avenue (Lake Avenue was renamed Lake Park Avenue in 1913) was to be enlarged and to have a new stage added. The architect for the $8,000 project was Edwin J. Seipp.

The 1910 Economist item names a John A. Orb as the owner of the theater that was being altered. Interestingly, Orb was a brewer, and in the 1880s had been associated in business with another Chicago brewer, Conrad Seipp. It seems likely that architect Edwin Seipp was related to Conrad Seipp.

The November 12, 1904, issue of the Chicago Eagle carried an advertisement for the Murphy Bros. Theatres. They had the Cream City Theatre in Milwaukee and the Ashland Theatre in Chicago, and also in Chicago the Hyde Park Theatre, 55th Street and Lake Avenue. The new Hyde Park Theatre opened at 53rd and Lake in 1914 must have been the second house of that name.

A preservation web site says that the Jefferson Theater was one of the buildings replaced by the Art Deco Ritz-55th Garage in 1929. If there was a Jefferson Theatre operating in Chicago in the 1940s it must have been at a different location.