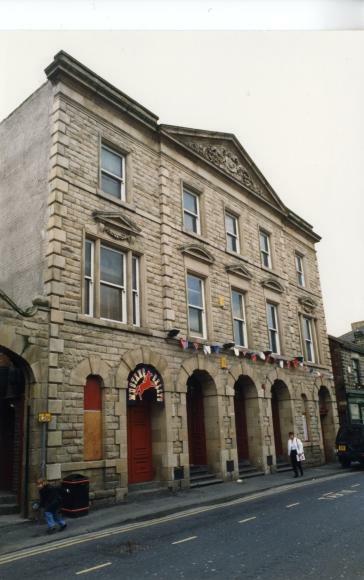 This was Barnley’s 2nd Theatre Royal. It opened on 7th June 1898 with Morrell & Moullet’s No. 1 Company playing “The Geisha”. It was designed by architects Walter Emden & Herbert Crawshaw with plaster decorations carried out by Jonas Bins & Son of Halifax. Seating was provided for 1,418 with 174 in the orchestra stalls, 42 in the front dress circle, 200 in the rear circle, 600 in the pit and 600 in the gallery. It has a 28ft wide proscenium and the stage is 50ft deep. There are eight dressing rooms. In 1907 architect A.G. Mitchell was brought in to do some remodling of the theatre and it became the Royal Opera House until at least 1912, before returning to its Theatre Royal name.

In April 1942 the stage house was gutted by a fire which destroyed the plasterwork on the front of the boxes. It was rebuilt to the plans of architectural firm Dyson, Cawthorne & Coles and a a new safety curtain was installed. For many years the Theatre Royal operated as a variety theatre and was closed on 18th May 1957.

In June 1985 the Theatre Royal was designated a Grade II Listed building.