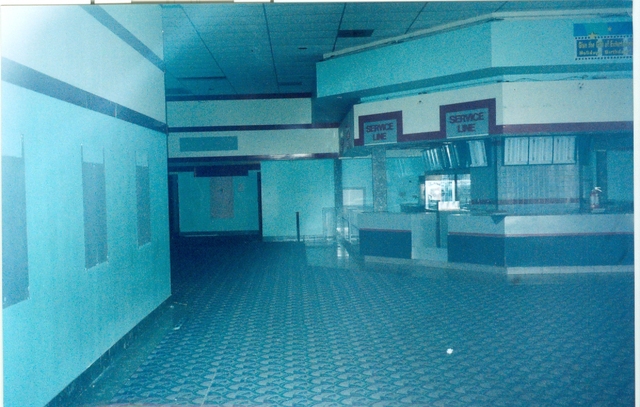 This movie theatre, located on Golf Road just north of Golf Mill Mall in a non-descript strip mall, was opened in 1984 by the Essaness chain. It was later taken over by Cineplex-Odeon, and finally Loews-Cineplex.

The theatre was closed down in the late-1990’s after the Loews-Cineplex chain went through bankruptcy. In 2002, Village Theaters took over and reopened the six screen Golf Glen. It operated until February, 2006, when Village closed the Golf Glen. It has since been re-opened (minus one screen) by the Phoenix AdLabs Theatres chain, and by 2010 operated by their subsidiary Phoenix Big Cinemas. In July 2014 it was taken over by Moviemax Cinemas.

I remember when the Golf Glen opened back in the summer of ‘84. I was a teenager at Maine East High School and the first movie I saw there was KARATE KID. I also remember seeing BACHELOR PARTY, CONAN THE DESTROYER, ELECTRIC DREAMS and REVENGE OF THE NERDS that same year there, too. I liked to grab a bite with my friends after a movie at the Omega restaurant, which was located in the same strip mall. It was never my favorite place to see movies, because it was so small and unimpressive. I’d rather watch the big blockbusters and must-sees at the nearby Golf Mill and Old Orchard theaters and usually check out a lot of the smaller films and B-movies at the Glen. I saw almost every 80s horror, action and sex comedy released from '84 to '90 there, including: CREATURE, JUST ONE OF THE GUYS, PORKY’S 3: PORKY’S REVENGE, HELLRAISER, PHANTASM II, PRINCE OF DARKNESS, NIGHTMARE ON ELM STREET 2: FREDDY’S REVENGE, BREAKIN’ 2: ELECTRIC BOOGALOO, THE HIDDEN, DEADLY FRIEND, THE WRAITH, DEAD AGAIN, UNDER THE CHERRY MOON, BIG TROUBLE IN LITTLE CHINA, WANTED DEAD OR ALIVE, INVASION U.S.A., MISSING IN ACTION and PREDATOR. I don’t think I saw any films there at all in the 90’s. It was definitely a product of the era.

What a change between now and its Village or C-O days.

Mike I saw KArate Kid there too. Right around Labor Day of 84. Also saw Secret of the Sword(He Man movie) and Iron Eagle.

No showtimes at the Big Cinemas/Phoenix website. Is this theatre closed again?

The theatre’s Yelp page at http://www.yelp.com/biz/big-cinemas-golf-glen-5-niles is full of bad reviews for this cinema.

Most assuredly open. I had lunch at the Filipino restaurant next door to the theater yesterday. A steady stream of customers were seen going to the Bollywood matinees.

How soon we forget. The notion that Village Theaters ever existed completely slipped my mind. The fact that it was run like a criminal front operation probably has something to do with that.

Changed the name to Moviemax Cinemas last month. For the description, note that Phoenix Big Cinemas was just an arm of Phoenix Adlabs, so it’s misleading.

BIG Cinema, Golf Glen IL, is listed among the company’s projects on the web site of architectural firm Paradigm Design. As it is listed under that name, I suspect it was only a remodeling job done when the operation was taken over by Phoenix AdLabs.