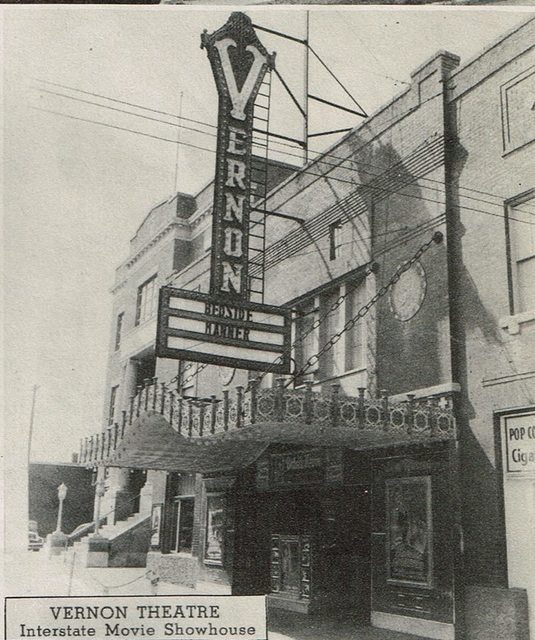 The Vernon Theatre was located on Main Street and was formerly known at the More Theatre. It was located between the Municipal Building and the Pendleton Music Store in 1917. It had been renamed Vernon Theatre by 1926 with seating for 600. By 1941 it was operated by Paramount Pictures Inc. through their subsidiary Hoblitzelle & O'Donnell. The seating capacity was given as 864. By 1950 it was listed with 923 seats and was destroyed by fire in September 1952, although was still listed as open in the Film Daily Yearbook 1955.

Photographs of both of these theatres as they existed in their time can be seen in the book Vernon, by Preston Cary.

The Vernon Theatre was destroyed by fire in September, 1952 per Joe Vogel. Two photos added, 1948 credit Peggy Ford and 1945 via Peggy Mewbourn-Mitschke Ford.

The May 14, 1927, issue of The Moving Picture World had a brief item saying “The Vernon Theatre at Vernon, Texas, has been opened, the house seating 1,000.” This must have been a rebuilding job, as the Vernon Theatre was advertised in the local newspaper earlier.

A “Fifty Years Ago” feature in the February 13, 1977, issue of The Vernon Daily Record said “Work on the new Vernon Theater is being rushed and it is expected that all construction work will be finished by March 15, according to Charles Ellis, superintendent in charge of construction.”

The project must have suffered delays, as the March 24 issue of the newspaper carried a page of congratulatory notices to Dent Theatres on the opening of the new house that day. I haven’t discovered what occasioned the rebuilding of the house, but it might simply have been that the original building was antiquated.

The Vernon was remodeled just a few months before it was destroyed by fire in 1952. An announcement in the February 28 Daily Record said: “Your whole face will lift in a happy smile when you see THE WONDERFUL JOB OF REMODELING AT THE NEW VERNON THEATRE OPEN SOON.” Sic Transit Gloria.