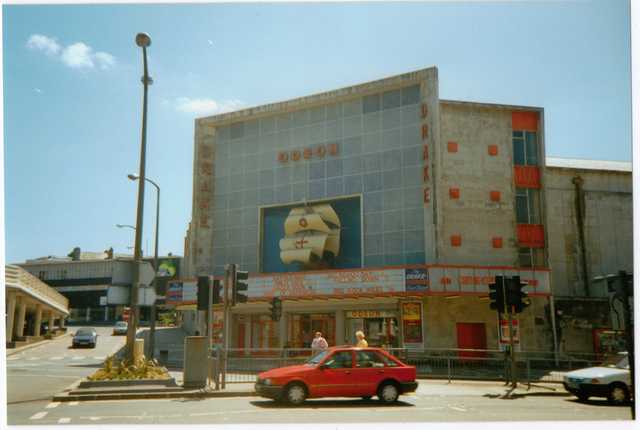 The cinema was named the Drake, a name made famous by a former mayor, seafarer and citizen of Plymouth, Sir Francis Drake. The large model of the “Golden Hind” sailing galleon on front of the building was a replica of one used in the Spanish Armada from 1588.

The Drake Cinema was built, owned and operated by 20th Century Fox from its opening on 5th June 1958 with Mitzi Gaynor in “South Pacific” presented in Todd-AO. Attending the opening night ‘in person’ were film star Richard Todd & Jackie Collins. The first 20th Century Fox film to be screened was Pat Boone in “April Love” later in 1958. The single screen cinema had a seating capacity for 1,639 in stalls and circle levels. On 26th March 1961 it was taken over by the Rank Organisation and became one of their ‘Odeons’. It was equipped with one of the largest screens in the UK and the projectors were Phillips multi-purpose 70mm/35mm. The stage was occasionally brought into use with one night pop shows.

It was tripled in March 1975 and renamed Drake Film Centre, with seating for 946 in the stalls and two screens in the former circle, each seating 168. In August 1980 entertainer Rolf Harris appeared ‘live’ in Screen 1 for 2 performances on a Sunday. It was re-named Drake Odeon around 1987-1988. On 29th March 1991 two screens were added located in the stalls under the circle, each seating 220. Closed on 31st October 1999, one of the final films screened was Adam Sandler in “Big Daddy” which played to an audience of nine!. Other final films were “Tarzan”, “The Thomas Crown Affair”, “Star Wars & "The Deep Blue Sea”.

It was demolished in 2002, with only the façade remaining. A Grosvenor Casino was built on the site of the auditorium, opening in 2003.

June 1958. I was there, as a lowly rewind boy on holiday from the Olympia Cardiff, I was able to get a ticket for the Birth of Todd AO at this theatre. I was allowed to vist the “Box” prior to the show and fell in love with those wonderful DP70s I went into the auditorium with the intro to “South Pacific” treating my ears to a sound system never heard before, and then——-those wide curtains swept open treating me to a new genre of film projection. On my return to Cardiff I raved about Todd AO and Foxes wonderful new cinema, then it was suddenly announced that my home cinema (Olympia Cardiff)m was to be fitted with DP70s. Thus started rhe most memorable period of my life. Even now over fifty years later I still get a thrill out of the original Todd Films

The Galleon on the original Drake Cinema was retained, and returned to the facade of the Casino. I managed to go to this cinema, and the ABC several times when I was able to… if you looked up the exit stairs to where the projection room was, you could still see the original Fox Theatres carpet on the treads.

I don’t remember Rank ever owning the building outright. They leased it off of The Prudential, who had bought the freehold off of Fox. They (Fox) had stipulated that the ‘Drake’ name should not be removed, hence it was known as the ‘Drake Odeon’.

When I lived in Plymouth, in the mid 1970’s, the former Gaumont Cinema (across the road) was operating as a night club. Is that structure still there?

Two recently found photos of the interior of the Drake here, both date from 1991.

According to this webpage, the theatre eventually had five screens before it closed: View link

One of the last truly magnificent cinemas to have been constructed in the UK!

Bit of a pedantry here… I don’t think the symbol on the map shows where the Drake was. The picture in the article was taken from the north side of Union Street at the west end of Derry’s roundabout, looking up the one-way street coming down the hill.

(I believe the symbol is actually showing the location of the ABC – fond memories of seeing Supertramp play there in 1975, I think it was).

When the Drake was tripled, they added screen 2 and 3 to the Circle but left “The Luxury Lounge” between the walls of the new screens.

When they converted it to 5 screens around half to two thirds of the back of the stalls was taken over by screens 4 and 5.
Screen 1’s screen width was reduced from it’s former glory.

Who remembers the awesome movie themed wallpaper with Bruce Lee on it.