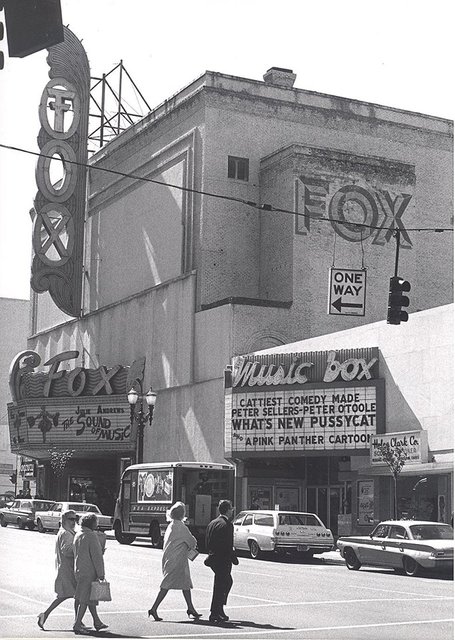 What I can gather quickly is that it was built into an existing building, its formal opening was on January 20, 1960, with 628 seats (later reduced to 611, probably to fulfill ADA requirements,) it was equipped with DP70 projectors, it closed before 1991, and was demolished in 1997, along with the rest of the block, for the Fox Tower project.

Built as the Broadhill Building in 1924. Remodeled into Music Box Theatre in 1959 by architectural firm Carlson, Eley & Grevstad.

The Overview should be credited to Joe Vogel. Below is the Historic Resource Inventory link/PDF which has the full history of the Broadhill Building/Music Box Theatre. Copy and paste is the only way to access the link.

I always thought the Fox marquee was dramatic and made Broadway in Portland like Las Vegas in terms of glitzy electric neon. Was never in any of these theatres on Broadway. The only theatre in Portland I was in was the Bagdad. It still exists and is running first run films.

The picture reminds me so much of the Chicago Theatre and the Loop Theater—the little semi-storefront just to the right of the huge palace. Wonder if anybody thought to play the Schwarzenegger/Devito “Twins” in one of these.

The October 19, 1959, issue of Boxoffice said that John Hamrick’s new Music Box Theatre in Portland, slated to open in early 1960, had been designed by the architectural firm of “Carson-Ely-Grevstad” [sic].

The firm was actually Carlson, Eley & Grevstad, the principals being Paul Gordon Carlson, Frederick Richard Eley, and Barney Elmer Grevstad. Eley was the son of Frederick Harry Eley, the first registered architect to establish a practice in Santa Ana, California, and the architect of the 1913 Yost Theatre in that city.