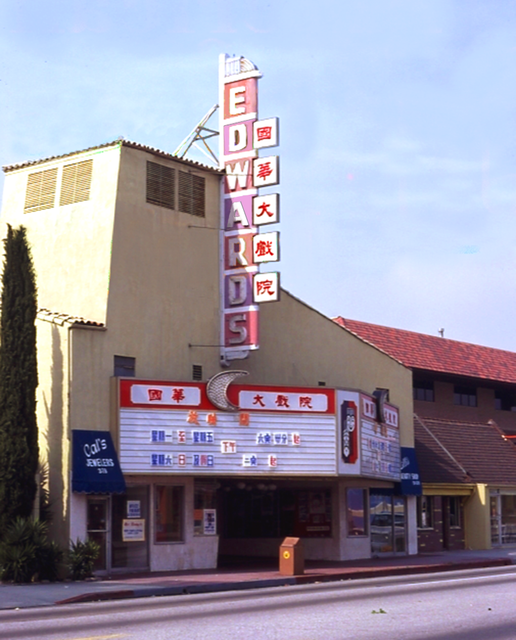 Built in 1941, the theater had Spanish roofing tiles at corners of facade. The San Gabriel Theater was opened February 18, 1942 with Greta Garbo in “Two Faced Woman” & Claudette Colbert in “Remember the Day”. In 1980, it was renamed the Kuo Hwa Theatre, showing Chinese films (saw Jackie Chan’s “City Hunter” there) and was torn down in 1996 or 1997. There were seven vertically stacked squares above marquee that spelled EDWARDS. The letters were later covered with Chinese characters.

When the building was being torn down, a beam under the marquee was exposed with the words “Edwards Century” written on it. There was a crescent moon in the center of the marquee.

The Kwo-Hwa 2 was located on Valley Blvd and not Las Tunas. Today the site is a lot.

manwithnoname, you must live really close to me. I live not far from San Gabriel.

I found this on the LA Library database. I can’t add it as a new theater as they don’t provide the name:
http://tinyurl.com/2m6fvm

Went here many a weekend in the early 90’s to feast on the glory of HK Cinema and BBQ shrimp crackers with my pal, Jeff.

The Edwards became a Chinese Language cinema originally in 1980, named the Kuo Hwa, it ran Shaw Brother’s films, for it’s first few months and then became the home for all of Golden Harvest’s releases. When it closed (date unknown), the theatre was rechristened The Bridge, where it continued to run Golden Harvest titles until The Whittier Earthquake finally ended the run of this little house.

The Whittier Narrows earthquake struck on the morning of October 1, 1987, so if that event led to the permanent closure of this theater, the last show must have been run on the evening of September 30.

I recall a few visits as a kid in the early 70s when living in Monterey Park. My parents took me to a double feature of “Diamonds are Forever” and a bullfighting documentary narrated by Anthony Quinn called “Arruza”. Another time I went was a double feature of “Snoopy Come Home” with Disney’s “Now You See Him, Now You Don’t” (Kurt Russell) – must have been 1972. Two other screenings I didn’t attend – “The Other (1972), where they were offered free admission to any identical twins on the opening Wednesday. Another time, a gory horror film, "Mark of the Devil”; I think was rated R. It was a small quaint theatre, with not that huge a screen, but had a welcoming ambiance.