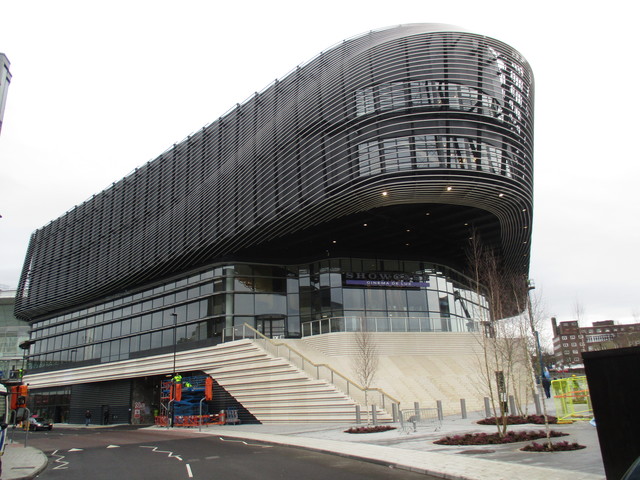 In Southampton, Hampshire, the Showcase Cinema de Lux opened on 10th February 2017 in the Watermark centre on Level 4, alongside the new Westquay shopping centre.

The cinema occupies an incredibly eye-catching triangular building, with the entrance to the cinema reached by a monumental set of steps.

The first restaurants opened over the weekend of 10th and 11th December 2016, with the remaining restaurants and Hollywood Bowl opening throughout December.

The spacious, and fashionably dark, but extremely luxurious, cinema foyer is at first floor level. A striking feature is the 40-screen ‘flying’ video wall, mounted over 11 metres high, displaying content at 8k resolution.

On the top level is the VIP Mayflower Bar, which boasts stunning views across Southampton Water. From there the VIP seating in each of five screens can be accessed.

The largest 300-seat auditorium features a wall-to-wall 64.5ft wide XPlus screen, said to be the largest on the South Coast.

Wall-to-wall Scope screens with no masking in all auditoria. Screen 6 has the largest screen branded ‘XPlus’ but the screen size in each is impressive relative to the auditorium size. All have stadium seating with large reclining seats in spacious rows. Very dark during the film enhanced by having black matte walls.

If this is the standard design for Showcase ‘Cinema De Lux’, it is a very good formula. This is an excellent new cinema and great place to watch movies in.

The first cinema in the UK to have (Barco) laser projection and Dolby Atmos as standard in all screens. Also customisable electric recliners in every screen plus a XPlus screen.

I need to check out this cinema…