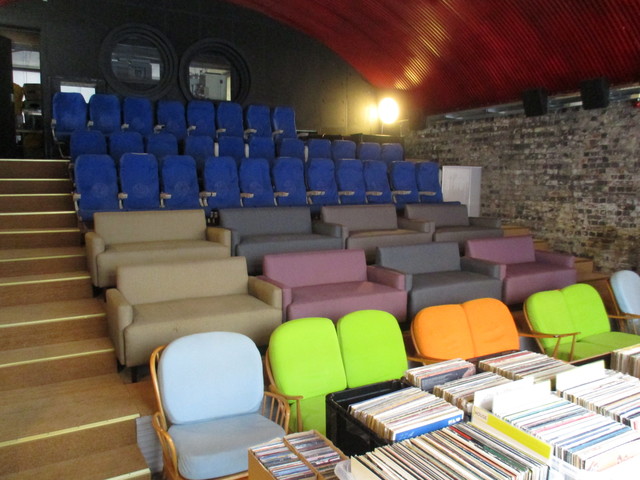 In the area of London Fields in the east London district of Hackney. The Institute of Light is a self-styled “one-stop cultural hub set in Arch 376, an enigmatic railway arch under the rumble of the ‘Great Eastern Jazz Line’, working as a multi-sensory space, repertory cinema, vinyl record store, film, music and photography bookshop and social café.”

The IOL opened on 8th June 2016. Uniquely, the nicely raked cinema seating faces the glass entrance doors. When a film is shown, the screen drops down in front of the doors, and patrons then use the rear entrance, directly into the cafe/bar at the rear.

During the day, when the cinema is not operating, the space in front of the seating is occupied by sales tables holding boxes of vinyl records. The Institute of Light was closed on 27th September 2018 with Brady Jandreau in “The Rider”.

I made my customary visit on Good Friday, 14th April 2017, to see the 9pm screening of “Personal Shopper”, starring Kristen Stewart. When I arrived, the early evening film, “The Salesman”, starring Taraneh Alidoosti and Shahab Hosseini, was on, so the shutter had been brought down behind the front doors (see the Overview above) and a helpful map shows how patrons should enter the cinema via the rear entrance.

That leads to a covered courtyard with tables and chairs, which in turn leads to the café/restaurant directly behind the auditorium.

In the auditorium, seating is a mixture of “airline” seats, other free-standing seats and two-seater sofas. All are very comfortable and there is a very generous rake, affording excellent sightlines. Adding to the ambiance were the frequent trains passing by overhead (the cinema is in a converted railway arch!) – as “Personal Shopper” is a ghost story it was sometimes unclear whether the rumbling came from the sound system or the railway. But at least the railway wasn’t as intrusive as it was at the long demolished, but fondly remembered, Bijou, Sloughborough, as featured in “The Smallest Show on Earth”!

The cinema here closed down on 27 September. Last film believed to be The Rider.