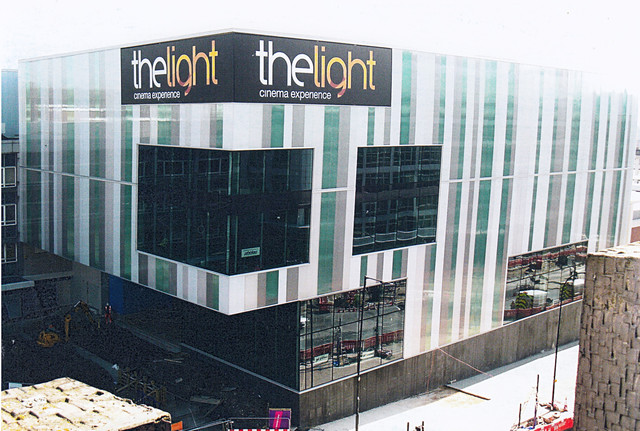 In Sheffield city centre, one of the main shopping streets is The Moor, a primary pedestrianised thoroughfare. (The shops along it were rebuilt in the 1950’s following damage in World War II and it was pedestrianised in 1979.)

By the 2000’s the area was becoming rundown, and Scottish Widows Investment Partnership, who own most of the buildings, began a programme of regeneration. After years of planning and construction a new flagship Primark store opened in October 2016 as part of Phase One of the regeneration.

The second part of Phase One included The Light Cinemas, which opened on 14th April 2017, together with a variety of restaurants, including Zizzi, Gourmet Burger Co. and Pizza Express.

Although the official opening was on Good Friday, 14th April 2017, there were two special public screenings of new release “Fast & Furious 8”, starring Vin Diesel, on Thursday 13th April at 7.45pm and 8.30pm.

According to the circuit’s publicity, “each of the 872 specially designed reclining seats are significantly wider than the average cinema seat, and each one has its own footrest.”

One of the circuit’s trademarks is a café-bar called The Green Room. At Sheffield, this has a piano, and there is a multi-purpose function room for meetings and parties.

I was given my usual warm welcome by the friendly staff when I visited, on 20th October 2017, to see “The Snowman”, starring Michael Fessbender. One trademark of the Light cinemas is their use of multi-colour design in the auditoriums, making them very attractive and welcoming. The foyer is also very well laid out, with lattice screens separating bar and cafe areas. Seating capacities are: Screen 1:170; Screen 2:56; Screen 3:54; Screen 4:50; Screen 5:64; Screen 6:101; Screen 7:82; Screen 8:167 and Screen 9:128.