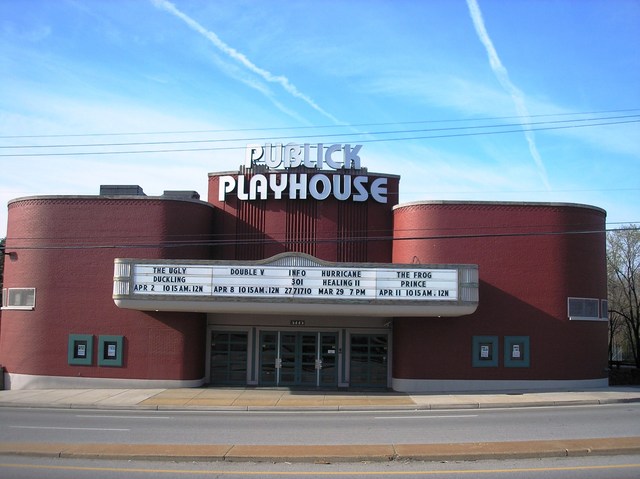 The Cheverly Theatre opened in 1947 with Red Skelton in “The Show Off”. It was the 10th theatre to be built for the Sydney Lust Theaters chain and was designed by architects John & Drew Eberson in a Streamline-Moderne style. The Cheverly Theatre was plush and elegant, and its auditorium included a painted “sky” on its auditorium ceiling, following the tradition of Eberson’s Atmospheric style palaces of the 1920’s.

Into the 1960’s, the Cheverly Theatre remained a popular cinematic destination, but eventually fell into decline and closed. In 1975, the Maryland-National Capital Park and Planning Commission was able to acquire the Cheverly and began a restoration of the former movie house. It reopened thirty years to the day that the Cheverly had its first grand opening in 1947, now serving as a venue for performing arts, legitimate theater, concerts, dance and community events.

A vintage photo of the cheverly is available on Library Congress, as “Griffith Consumers Co. Exterior of Cheverly Theater."
View link

Looks pretty much the same, except the box office window looks absent. I wonder why they changed the name? Cheverly seems more sensible than “Publick”… it’s certainly not ‘olde tyme’ style in the least.

I work in Tuxedo and pass by there every so often. I am glad it was saved.

Has anyone been inside of this venue recently?
Was the interior restored or maintained as original?
Did the sky painting on the ceiling remain?