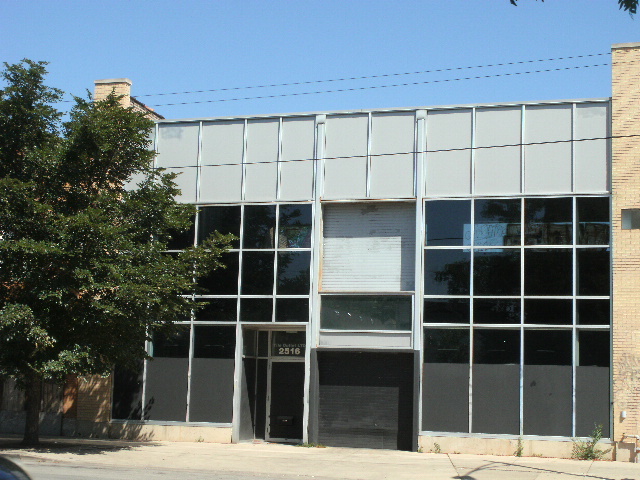 Opened by at least 1914, the Rogers Theatre was located in the Logan Square neighborhood, on W. Fullerton Avenue between N. Maplewood Avenue and N. Campbell Avenue. It was in operation into the 1950’s. Today, the building serves as a warehouse for a nearby Tile Outlet store.

Correction.. this building still stands. The Marque remained intact thru the mid 60’s. In 2000 or 2001 , the entire facade was deteriorating and removed. It was replaced with 2 story tall – glass windows. You can now see inside with ease. While the floor is leveled and the interior 98% gutted.. ( looks like it was used as a factory of sorts) , the Ceiling still remains and you can see some of the simple ornate plaster work. According to my MOM.. My uncle was an Usher there in the late 1920’s and he used to sneak her in thru the fire escape to watch the movies. (shhhh don’t tell !!)

It’s a warehouse for Tile Outlet which is just down the street. Here is a photo of the facade being changed.

The Rogers was open as early as 1916, according to ads

The Rogers Theater, 2516 Fullerton av., is showing a film called “Marihuana,” today and tomorrow. The picture depicts the devastation the weed causes among young people and efforts of authorities to curb the use of it.

To marihuana, cultivated secretly in the United States, the police attribute a great percentage of juvenile delinquency. The film was produced with the co-operation of federal narcotic authorites and officials of many states. The picture is being shown at the Rogers to adult audiences only.

Bring along some brownies for later.

The photo Brian uploaded on July 2 sure looks a lot like the Morse/Coed/Mayne Stage Theater in Rogers Park. Is there a connection?