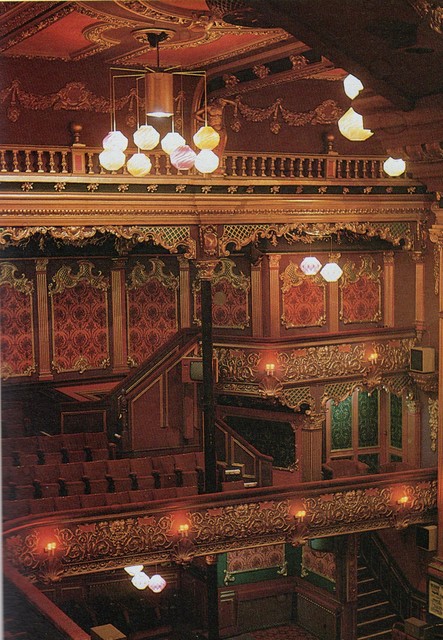 The Grand Junction Theatre and Floral Hall was opened on 7th October 1901. It was a drama theatre, and presented plays, pantomimes, opera and occasional variety shows. It was designed in a Moorish/Roccoco style by architect J.J. Alley. (In 1902 J.J. Alley also designed the smaller Hippodrome variety theatre (later Playhouse/Nia Centre) which was built adjacent to it at the corner of Warwick Street). It was built for and operated by the Broadhead’s Theatres circuit and was their head office. Seating in the theatre was provided for 2,000 in orchestra stalls, dress circle and gallery levels, with 1,000 seats in the Floral Hall.

In 1905 it was re-named Hulme Hippodrome Theatre and was screening films as well as presenting variety shows. Films continued to be screened until at least 1927. From 1942 until 1949 it was re-named Manchester Repertory Theatre. In 1950 it was taken over by the Brennon Cinemas circuit and was refurbished & redecorated, becoming the Hulme Hippodrome Theatre again, re-opening on 20th February 1950 with a variety show starring Billy Reid & Dorothy Squires. In 1960, it became a ‘revue bar’ presenting stiptease performers. In 1962 it closed and was converted into a Mecca Bingo Club.

It was closed in 1986 and the theatre has remained empty and unused ever since. The Hulme Hippodrome is a Grade II Listed building.