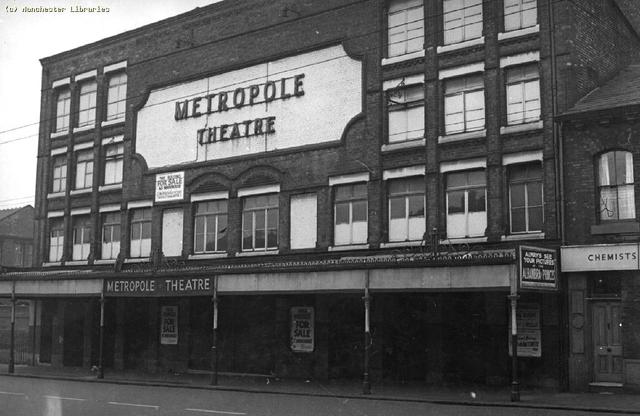 Located in the east Manchester district of Openshaw. The Metropole Theatre was the second theatre to be built and operated by the Broadhead’s Theatres chain. It was opened on 6th April 1898. Designed by architect J.J. Alley, initially seating was provided for 2,000, with seats in orchestra, dress circle and in the gallery on long wooden benches. There were two boxes on each side of the 28ft wide proscenium. The Metropole Theatre was a drama theatre, which also played opera and pantomime on its stage. By 1909 it was also playing silent films, which continued to be part of the programming until at least 1927. It was closed as a theatre in 1938 with the play “The Dumb Man of Manchester”.

It was purchased by the H.D. Moorhouse chain of cinemas on 22nd August 1938 and reopened as the Metropole Cinema. It had been equipped with a British Accoustic(BA) sound system and the seating capacity was given a 1,420. The Metropole Cinema was closed on 14th April 1959 with Frankie Vaughan in “These Dangerous Years” & Leo Gorcey & The Bowery Boys in “Dig That Uranium”. It was demolished in 1962.