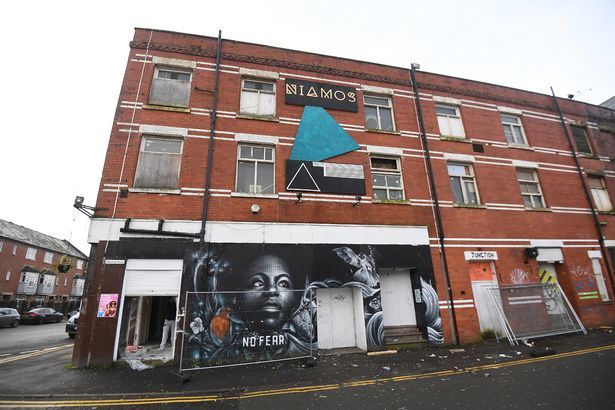 Located in the northeast Manchester inner city district of Hulme. The Hippodrome was built and opened on 6th October 1902 and was adjacent to the 1901 built Grand Junction Theatre. Both theatres were operated by the Broadhead’s Theatres circuit, the Hippodrome being a small variety theatre and the Grand Junction Theatre a large playhouse theatre. Both were designed by architect J.J. Alley. Seating is provided in stalls dress circle and balcony levels, with long wooden benches in the slips at balcony level.

In 1905 the Hippodrome was re-named Grand Junction Theatre presenting drama productions and the adjacent Grand Junction Theatre became the Hulme Hippodrome presenting variety. In April 1929 it converted to cinema use and was re-named Junction Picture Theatre. In 1950 it was taken over by the James Brennan circuit and was refurbished. It reopened on 22nd January 1951 as a drama theatre re-named Playhouse, with “The Happiest Days of Your Life”.

In 1956 it was taken over by the BBC for the production of radio & television shows, the first production being in January 1956 a revue “Call it a Day”. In 1970 the BBC installed a Compton organ which had been removed from the Empress Ballroom, Blackpool. The BBC vacated the building on 25th August 1986.

In 1990 it was taken over by the Nia Group to be used as an Afro-Caribbean cultural centre for drama, music & dance. It was re-named Nia Centre and opened on 22nd April 1991. After many years, they moved out and the building became a Evangelical church for a while. It was vacant & unused in 2017. In 2018 it was puchased be a new owner and became a community centre from July 2018, with some films being screened. On 24th November - 2nd December 2018 the Manchester International Short Film Festival (Kinofilm Festival) will be held in the theatre.

On 19th December 2019 it staged the first live theatre event to happen in the theatre for 25 years with a production of the alternative pantomime “Snow White’s Priviledge”.

In early 2018 the building was sold by owners Northern Estates at auction and is now owned by a local Asian business man. The building has been leased to a local community group who have now reopened the building for use community reach for the last two months with various small scale events and workshops etc. In October there will be a series of film screenings as part Black History Month and in late November, Kinofilm, Manchester International Short Film Festival will be running it’s annual film festival from the theatre. For details please contact the writer of this message, as we will do an opening day during the festival for those interested to see in side the building again. John.

Tickets for all screenings for the November festival are available here…… https://www.eventbrite.co.uk/o/15th-edition-kinofilm-festival-15531436304

When used by the BBC, it was known as The BBC Northern Playhouse Theatre. It was set up, and used, as a recording studio to produce radio broadcasts requiring a live studio audience, there being no space at the small Manchester Broadcasting House in Piccadilly. The stage was stripped back of all decoration and contained only a band-stand surrounded by wooden sound baffles, both moveable and fixed. Lighting was by ambient, white bulbs only. There being no need for anything else. There were no wing or tableau curtains. There was a large, glass fronted box in the rear stalls. This being the Control Room, frequented by the TOs (Technical Officers) who’s job it was to mix and record the sound output for subsequent broadcast. When I first visited the building, in 1964, it was as a very new GPO telephone engineer, fresh out of my apprenticeship. My task was to provide a new Private Circuit from BH (Broadcasting House) Piccadilly, to The Playhouse theatre. Having completed all the preliminary work at BH, I presented myself at The Playouse. The doorman kept me in the foyer, for a while, before escorting me to the front stalls. Here I was told to sit and wait - and to be quiet! Nina & Frederik were on stage, rehearsing and recording some tracks. Apart from the TOs, in the box, I was their audience of one. Microphones and their associated cabling were everywhere, including ones above my head to record audience reaction. I did try to keep quiet but, after one track I forgot myself and applauded. It had to be done again! When the duo had finished their set, the doorman led me through a small door, to the right of the stage, and down into the basement. Directly beneath the stage were a row of dressing rooms. Despite there being no need, these were still complete with makeup tables and mirrors surrounded by light-bulbs. Above each mirror, in a plain batten-holder, was a red, pygmy bulb. I was shown where to install the red telephone I’d brought, and told that when the red lights were on I must make no noise. At the end of each narrow dressing room was a removable wall panel. These led into a slim access tunnel, directly beneath the stage apron. It was down this tunnel I would be running my cabling which, with hammer and staples, I proceeded to do. Halfway thrugh my task, I became aware of a banging above my head. Shortly thereafter, a head appeared from one of the dressing rooms. It demanded to know why I was ‘ignoring the red light.’ Apparently, ‘Mr. Herrman was trying to rehearse the NDO.’ Mr Herrman was, of course, Mr. Bernard Herrman, leader of the BBC Northern Dance Orchestra. And so, my job proceeded sporadically, only in the periods when the ‘red light’ was off. My second visit to the building was in 1967, as part of a studio audience. I had got free tickets, for myself and my girlfriend, to witness a recording session of ‘The Move,’ primarily for a lunctime radio show but also for the BBC recordings library. In the auditorium the sound was dreadful. On the subsequent radio show, it was perfect. Coincidentally, in one of life’s strange twists, my second wife (now ex) is Roy Wood’s cousin!