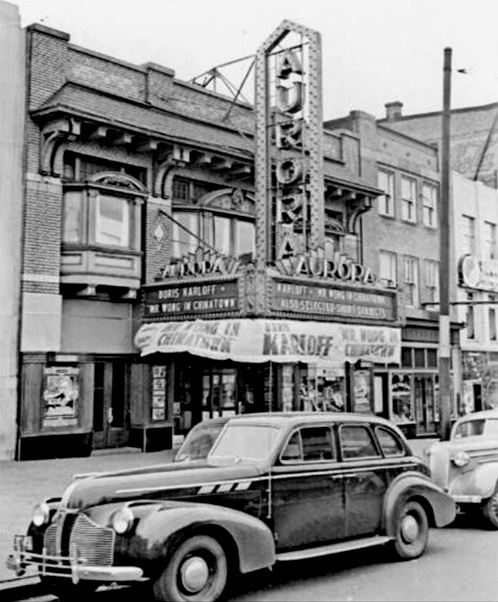 In a three block area of North Avenue, near Charles Street, there were four theatres at one time, including the Aurora, Peabody, Parkway, and the Centre. Just down Charles Street, is the Charles Theatre.

Opened as the Aurora Theatre on October 15, 1910. In 1919 a 2 manual 8 ranks Moller organ was installed. It was taken over by JF Theatres in 1958. In 1962 it was leased out to Trans-Lux. In the fall of 1964 it was renamed 7 East Theatre. In May 1974 it was over to screening soft core adult films and was known as the North Cinema. It was raided by the police on May 24, 1974 when the manager was arrested for screening “Deep Throat”. In 1981 it became a repertory cinema, reverting back to the Aurora Theatre name. In October 1982 it became the Aurora X, screening adult movies. It closed in 1984.

It has been used as a church since 1979. The area is currently undergoing a transformation and it could be interesting to see what happens to the old theatre in all the changes.

The theatre was remodeled in 1921 and again in 1960. It is now the Solid Rock Free Will Baptist Church

The theatre building is in great shape and intact inside. Some parts of the old organ are still in the theatre.

The Aurora was known for some years as the 7 East, art-house sister to the Parkway/5 West across Charles St. The Aurora did reopen in 1981, under its original name, as a “repertory” theatre similar to the nearby Charles. This policy failed, and for its final years the house was called the “Aurora X.”

Here is a circa 1930s photo from the Baltimore Museum of Industry:
http://tinyurl.com/r99zl8

Here is a contemporary view:
http://tinyurl.com/yjrvx77

A paper about theaters on North Avenue (PDF here) says that the Aurora Theatre was opened by the Paradise Amusement Company in the fall of 1910. That means it must be the house referred to by this item from The Moving Picture World of April 2, 1910:

“Baltimore, Md. — Architect Francis E. Tormey has completed plans for a moving picture theater to be erected on the south side of North avenue, near Charles street, by the Paradise Amusement Co.”

Tormey designed a number of churches during his career, and now two of his theaters- this house and the New Horn Theatre- have also become churches.