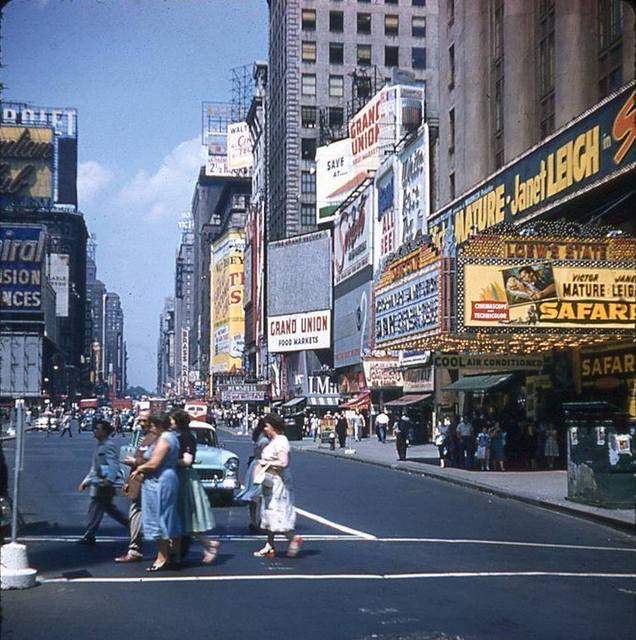 Loew’s State Theatre opened on August 9th 1921, with vaudeville and movies, and the adjoining office building that became Loew’s headquarters.

Many World Premieres were hosted here including “The Three Musketeers” on October 20, 1948. Loew’s State Theatre was closed in 1958 for modernisation. The theatre reopened on March 28, 1959, with the World Premiere engagement of “Some Like It Hot”. The theatre was very successful in the 1960’s with reserved-seat road shows such as “Ben Hur”.

Partly due to the loss of Loew’s Capitol Theatre, Loew’s twinned the State Theatre. The balcony overhang was extended to create State 1 (1,172 seats) in the downstairs auditorium, State 2 (1,214 seats) used the upper portion of the original proscenium arch, was designed in a more ornate fashion, and had some original side wall and ceiling decoration visible. The theatre reopened December 1968, with “Oliver” in State 1 and “Chitty Chitty Bang Bang” in State 2.

In the 1990’s the State Theatre and the adjoining office building which had been Loew’s headquarters were demolished and replaced by a Virgin Megastore. A replacement four-screen multiplex, the Loew’s State 4, opened in the basement in 1996, but closed in 2006 after the opening nearby in W. 42nd Street of two stadium seated megaplexes; the AMC Empire 25 and the 42nd Street E-Walk(13-screens opened by Loew’s in 1999 and operated by Regal since the AMC-Loew’s merger)

Well Kennedy does not actually do the hatchet job I was expecting. In fact he seems to have found it not half bad. I was fortunate enough to have seen it at the Warner Cinerama with its quite spectacular sound system and 80ft screen.

Well Oliver was a blowup like Funny Girl a block south so I don’t think that counts. They look good but they would have looked better in 70mm. Too bad at this point fewer films were using this process along with the following years PYW. After Airport they were all blowups I believe until Tron(actually a mutt, but I kind of enjoyed it for its visual effects) a disappointment which seems to be getting a lot of love close to 40 years on. The Disney ride currently in Shanghai will open in Orlando in ‘21. The pov is on youtube which if you get it through your tv looks kind of cool.

The winter photo with Oliver on the marquee actually looks like'69. Is that the Krakatoa East of Java 45th to 46st billboard going up? They knew Star was being pulled early at the Rivoli so that had to come down but I believe it made it through the holiday season. I saw it then. Looks like Ice Station Zebra is still at the Cinerama or at least the billboard is still up.

The winter photo could very well be early `69 as you say. The very first photo on the Loew’s State page shows “Oliver!” sharing the bill with “Chitty Chitty Bang Bang”, the latter which was released 12/18/68 in the U.S. Surely with the success of both films, they would have ran well past Christmas into the following year. Link to that photo below.

to vindanpar- I saw Oliver twice during its roadshow engagement here. once the week before Christmas and then in February. after the second time i wrote a letter to Columbia Pictures whose New York offices at the time were at 715? Fifth Avenue. about a week one day when I got home from school my mother said a big package had come for me. it was from Columbia Pictures. i don’t think a studio would send out a similar package today. inside were a set of all full size posters for the film, a packet with all the b&w stills they had released, all color lobby cards both legal size and twice as large. nice hey?

I saw Oliver! there in 1969. We had to buy tickets in advance. I think they came in the mail, packed in a small envelope. I posted a picture of the marquee that my dad took on Good Friday, 1969.

Guodone, I recently posted this to the Odeon Sheffield CT page in Great Britain. It is the order form they used there for tickets by mail for “Oliver!”.

recently I bought the 4K Columbia Classics Vol. 2 set primarily for Oliver since I was dissatisfied with the Twilight Time blu-ray disc released a few years back.

*the richness of the colors and the clarity of the picture is A+ but there’s a defect so to speak on the audio tracks. thru out the film every often you hear a rather audible sound as if someone was lightly blowing on a tuba. I haven’t watched the blu-ray to hear if the audio defect is repeated.