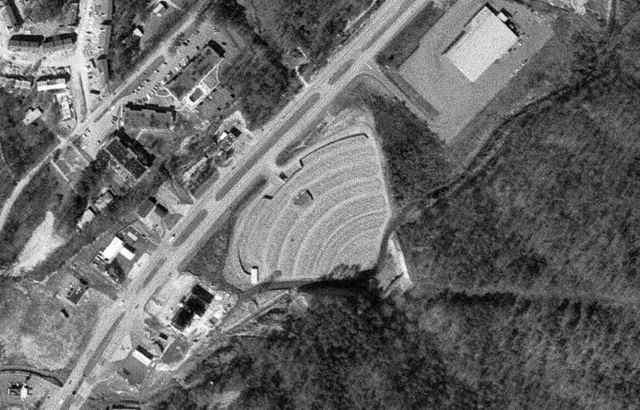 In the late-1960’s Cobb Theatres acquired the interests of the Newman Waters Theater Company which included the Shades Mt. Drive-In. That property was on the southern edge of the commercial development of Vestavia Hills, and within a couple of years Cobb Theatres sold the site and a shopping center was built on the land.

Cobb Theatres moved down the hill to this location which is right on the Vestavia Hills / Hoover line and built a new drive-in. They named this new theatre Thunderbird Drive In which was a very popular name within the Cobb Theatres chain. It opened on October 4, 1968 with Julie Christie in “Far From the Madding Crowd”.

The address is a bit off:

While the Thunderbird played its share of sex and horror drive in fare, it was mostly a standard second run venue. The first run locations were still downtown or in the north side suburbs. First run movies did not come to the south side until 1977 when ABC opened the Hoover Twin about a mile down the road. In 1971 Cobb opened an indoor quad in the old Homewood Lanes bowling center but it was also second run.

If you look at the picture that Drive In 54 was kind enough to post, the building on the right is the Vestavia Lanes bowling center which is still there today. In 1972,a new shopping center was built on the other side of the Lanes. It contained a single screen Jerry Lewis Theater which competed for the second run product, but not for long. In less than two years Cobb bought it out, changed the name to “Vestavia” and for the next few years operated both an indoor and a drive in separated only by the bowling center.