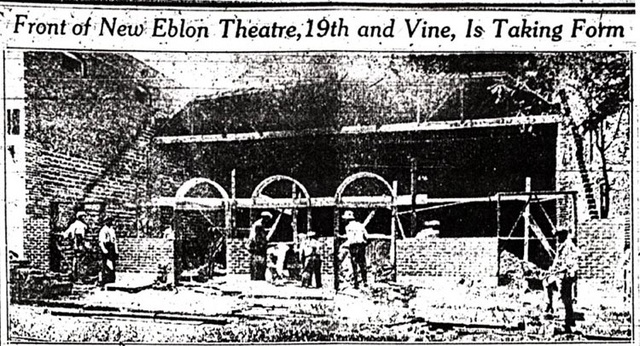 The Eblon Theatre was an African-American theatre which opened November 4, 1923 with Mae Murray in “Broadway Rose”. It was closed in 1933.

It was converted into the Cherry Blossom nightclub where Count Basie formed his first orchestra and also played the organ. The Cherry Blossom was renamed Cez Paree by 1944 and it closed around 1960. The building stood vacant until it was severely damaged by a fire on August 2, 1984. Only the facade remains today.

The Eblon Theatre opened at 1822 Vine Street on November 4, 1923. Movies were accompanied by a live orchestra for the first few years of its operation, but an organ was installed in 1928. In 1933 the theater was closed and the building converted into a night club called the Cherry Blossom, which became the venue at which Count Basie conducted his first orchestra.

In 1984 the building, which had then been vacant for more than two decades, was seriously damaged by a fire. Attempts to save the historic structure failed, but the facade was propped up and still stands today. This weblog post covers the early history of the theater, and has a few photos of the surviving facade.

This web page briefly covers the same history, and has an ad from the Eblon Theatre’s opening. Click on the ad for a larger version, then follow the next two links (right arrow at upper left) to see two 1923 newspaper items about the house.

Ah, I see the newspaper items have already been uploaded to the photo page.

Thank you, Ken Roe and Joe Vogel for the additional information.