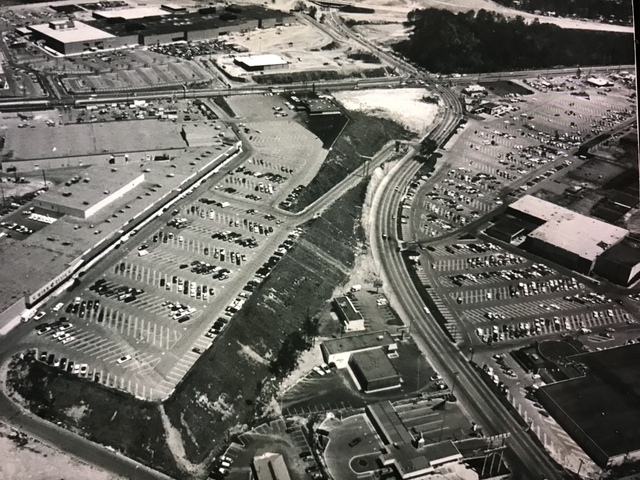 In the late-1960’s the R.C. Cobb company bought its way into a dominant position in Birmingham by purchasing the assets of the Newman Waters Theater Company, including the city’s prime first run house, Eastwood Mall. By 1972 they had bought up most of the independents such as the Capri Theatre, Empire Theatre, and Melba Theatre, leaving only the ABC Southeastern operated Alabama Theatre, Ritz Theatre, and Roebuck Plaza Theatre as competition for first run product. They then started building new first run locations.

This theatre was located in the new Village East shopping center directly across Orpoto Madrid Boulevard from Eastwood Mall. They were typical of the 1970’s era theatres with small auditoriums and lobby and a box office opening out onto the sidewalk of the strip center. I was only in it once and found nothing remarkable or even memorable about it. I would estimate the auditorium sizes at the usual 350 to 400 but I really don’t remember much which shows how bland the place really was.

It was also a great success given Cobb Theatres dominant position in the market and their practice of putting the prestige roadshow type releases across the street at Eastwood Theatre which at the time was still a single screen 70MM equipped Cinerama house. Village East 1 and 2 opened on April 7, 1972 with the opening features of “The Hospital” and “The Last Picture Show.”

Until the advent of the multiplex this place was a money machine for Cobb Theatres and ran a big share of the blockbuster movies for the 1970’s and early-1980’s, even after the Eastwood Theatre was twinned, becoming another unremarkable movie theatre just like its younger across the street sibling.

After 15 or so great years, the age of the megaplex arrived and Cobb Theatres opened their brand new Cobb Festival 12 just west down Crestwood Boulevard on May 24, 1989. Village East and Eastwood Twin were both closed on May 23, 1989. 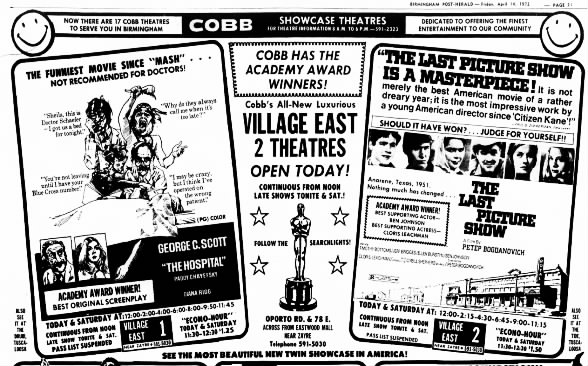