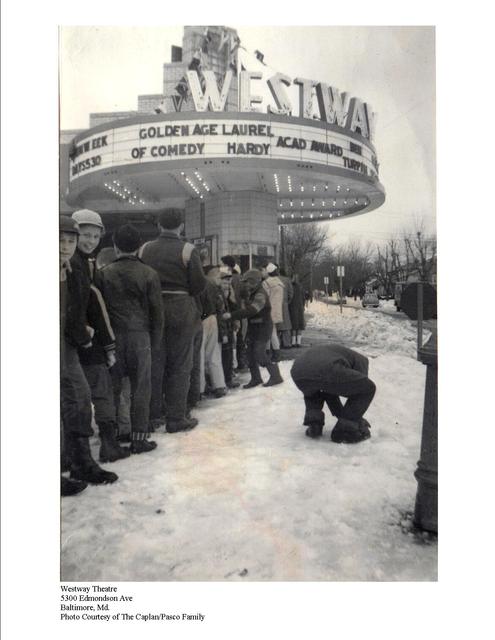 A tiny Art Deco style theatre opened on April 22, 1939 with 700 seats. It closed in 1975, more than likely due to the compitition of the nearby mall theatres. This was at the time considered the edge of the earth when the Westway Theatre was built, but later suburban development doomed the little theatre.

Its hallmark, and still being used by the church that occupies it today, is a circular marquee crowned by a tiny little ziggurat.

Here is another photo:
http://tinyurl.com/ygefgur

I recall going here in the mid 70’s. Price was right for kids. I don’t believe at that time they carried the new releases as fast as the new theatres, though I do remember watching Jaws there… What stands out – I recall a fella taking tickets, then opening the doors, running the snack bar, then going upstairs to run the projector. A one man operation. I also recall having a summer matinee pass, each Saturday I’d go in the afternoon and see 1 or 2 movies. The one matinee that stands out in my memory was about Evel Knievel.

My brother Aaron just sent me photos of the Westway Theatre from your Web site.

My grandfather Nathan Pasco owned the Westway Theatre from the 1950’s till it closed in 1979. My father Abel Caplan was the general manager. I grew up working at the Theatre when I was 12 till I was 19. It was a great neighborhood theatre and it was sad to see how it appears in your photos.

It used to have a stage in it and in the 1950’s and early 60’s, my father would book stage acts that would perform before the movie was played. There were long lines of kids on a Saturday afternoons waiting to get in for 15 cents and receive a free bag of popcorn, and to see “Marco the Magnificent”. the magician. (My uncle Alvin believes he set someone on fire at my father’s theater in Poplar Grove).

The interior of the theatre was a simple art deco design. There was an outdoor lobby behind the box office and a interior lobby that sloped up to the are were the candy counter was. Originally, there was only a nee wall that separated the candy counter area from the auditorium. The auditorium had dark green fabric walls with a decorative cream colored scroll with a leaf design with art deco sconces.

In the 1960’s, my father enclosed the wall with slatted shutters to separate the auditorium from the upper candy counter lobby. In the 1970’s, my grandfather would remodel the interior by removing the louvered shutters and building a solid wall, which protected the auditorium from unwanted sound from the lobbies. The green fabric scrolled walls would be covered with pleated material. The old stage was covered with a new larger screen. The outside lobby was enclosed and new carpets were put down throughout the theatre.

In the 1970’s we used to play midnight shows that included 100 Hotels, Woodstock, The Beatles movies to sell out crowds. We had two projectionists who liked to play games with the audience. During a showing of Easy Ryder, during the motor cycle race scene, Joe drove his motor cycle up and down the isle to screaming crowds. During a showing at a sold out matinee for kids, Joe and Rick switched the men’s room and ladies room signs. My grandfather was so mad because people who were regulars went to the correct bathrooms and new patrons followed the signs causing pandemonium in the bath rooms.

There was an opening at the bottom of the screen. You could climb through it onto the old stage and I would sometimes sit on the stage and watch a movie from behind the screen. It was really cool, because there were thousands of colored dots that would jump all over the old stage and on me.
I had great memories of The Westway Theatre.I thought I share some of them with you. I also wanted to share this photo of the Westway in the 1950’s with the long lines of kids, waiting in the snow to see Laurel and Hardy. It would be nice to see a photo of the Westway during it’s hayday.

I saw more films at the Westway than any other Theater.I remember the Caplan family putting on skits at St Agnes School promoting their latest films. Sometimes the entire school would walk down to see a films like “Born Free” and “St.Francis Assisi”. Saturdays, we would spend the entire day there. This is the first place I saw Wizard of Oz in color since we only had b&w TV back then. I also attended many Midnight Movies where a sweet smelling smoke filled the air. It breaks my heart whenever I ride by the theater.

We gave poor Abe a lot of gray hairs from the 50s to the 70s. I wasn’t there, but I remember the “Easy Rider” story. I lost my first wallet there (fell out of my back pocket – mid 60s) and I never kept a wallet in my back pocket since. Probably didn’t have but a few bucks in it. LOL! Plenty of good and crazy memories.

Jeremiah Deliverance? How appropriate! He prophesied a great deal about America and where we are today!