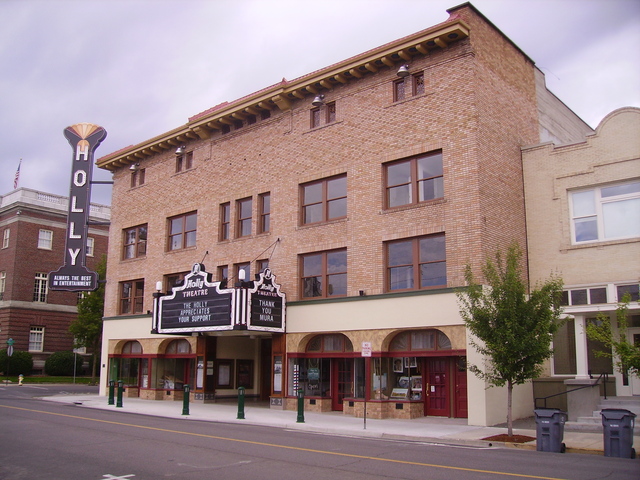 The Medford Mail Tribune says that the 1,200 seat Holly Theatre opened on August 29, 1930 and was designed by Frank Clark. Clark, a prominent Medford architect, designed many other Oregon buildings including the Craterian Theatre in Medford and the Varsity Theatre in Ashland.

For many years, the Holly Theatre was operated by Robert L. Lippert Theatres Inc. Lippert, in addition to his four houses in Medford, operated 162 theaters, mostly in California, and a movie production company. The theater closed in 1986 and has been overshadowed by the restored Craterian Ginger Rogers Theatre.

In December of 2002, a damaged roof truss was discovered which forced the businesses in the building to vacate. The truss was temporarily stabilized and the tenants moved back in. Art Alfinito, who purchased the building in 1996, had been exploring restoration possibilities but the city is looking for a more permanent solution to the roof before it can be opened to the public. In January 2009, the Holly Theatre was put up ‘For Sale’.

The Holly Theatre is part of the Medford Downtown Historic District.

The Holly had a re-lighting ceremony April 21st. They have come along way on the exterior, looks fantastic.

Update this past week, the UofO Ashland board has voted against JPR owning theatres and says it should only own radio stations. This action could put an end this next week (when the Truss is finished being repaired) to all restoration efforts by JPR to the theatre. The nonprofit I work for had considered purchasing the Holly before JPR did; but was told by the city that a parking solution to about 300 vehicles would need to be overcame. I think the city exempted JPR from the 300 parking space need (and why did they tell us we HAD to have the 300 spaces?). If the board’s actions hold, the Holly may again be up for sale; and we will again consider purchasing it (if parking and other things could be resolved). We use the same contractor that did the front of the Holly in recent months; so picking up steam again would not take long. Don Kirk – Medford/Redding

Southern Oregon University (SOU) and the Jefferson Public Radio Foundation (JPRF) have agreed to postpone any actions while a cooling off period of 60 days (also heard 90) takes place, with a private negotiator working with both sides to resolve the issue. In the meantime the head of JPRF leader Ron Kramer has resigned, at the reccommendation of SOU. Whether by JPRF, or another organization, the Holly is under restoration; and “Will” reopen in the next couple of years; for live-stage and films. I was in the Holly a couple of times this past few weeks and a lot of cleaning will need to be done; as well, years ago “all” seats were removed; so new seats will need to be added; as well as ADA needs. Don Kirk – Medford

While I applaud Mr. Kirk’s optimism about the Holly, I do not share it. Ron Kramer, my oldest brother, did not resign, he was terminated by SOU nominally on the basis that they were concerned about his dual roles as Director of JPR Radio and the JPRF, the Foundation that purchased and was overseeing the restoration of the Holly. This despite the fact that his contract with SOU specifically required him to serve in those dual roles and had required that for nearly two decades. At this writing there is little expectation that the SOU-JPR mediation will end in anything that assures the continued restoration of the Holly Theatre by anything connected to JPR and will more likely plunge JPRF into bankruptcy and the courts. I serve(d) as the restoration designer of the Holly Theatre (as I did for the Cascade, in Redding, CA) and can tell you first hand that while the facade has been restored and the truss has been repaired, there is considerable work left to do at the Holly. I know of no other entity on the horizon capable of stepping up and returning that building to the landmark of downtown Medford it ought be. JPR-SOU will be attempting to work out their differences but SOU does not believe that JPR has any business renovating or operating theaters and it is unlikely that any solution that remains under Southern Oregon University bodes well for this project.

JPR is looking for a manager of the Holly’s Restoration and operations. I have every qualification listed, “except” a BA degree. I’ve owned theatres, restored and operated them as live stage venues; but that don’t count, as I don’t have the degree. I’m sure they will hire a college graduate that has no past restoration & operation experience (maybe one area of experience, but not both). They probably will also bring in someone from out of town; even though I live in Medford; and go past the Holly several times every week; and have working relations with the same contractor that JPR used to redo the front of the Holly. I turned in a resume, but have heard nothing.

I might add, that I’ve met Ron Kramer; and did not understand SOU’s position on his holding the two positions; when it was required of him. He and I both spoke at the Press Conference held at the Holly, on the day the meeting was held next door about Ron.

For what it’s worth, I hope the right people are able to restore this gem.

Some perspective on the debacle that derailed the Holly. http://thepreserveoregonblog.blogspot.com/2012_12_01_archive.html

The Holly has been giving tours for some time now, the first Saturday of the month. Its a 90 minute look that takes you on stage and up to the booth. Some of the highlights: construction started in 1929 and opened in 1930 at a cost of $150,000. While primarily built for film, they had the foresight to add dressing rooms and a flywall for live theater as well. There are many access points into the underbelly of the theater. This has helped the many engineers and contractors determine its safety. As such, the Holly does not need any extra retrofits.