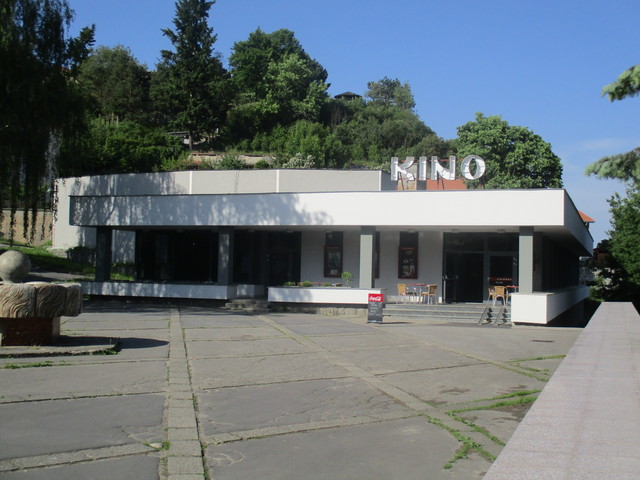 Cesky Krumlov is a small, historic town in the South Bohemian Region of the Czech Republic. The Old Town is a UNESCO World Heritage site and Cesky Krumlov Castle is a major tourist attraction.

Just four years after the first permanent cinema had been opened in Prague, Ludvik Lep opened a cinema in Cesky Krumlov in a rented room in the New Pub at Horní Brána 2 (now the Municipal Theatre). Projection was by a Pathé Apparat, model 1909 with the serial number 12 299. The first performance took place on 20th October 1911.

On 21st November 1921 a second cinema, Unity of the Shumen, opened. Both closed down during World War II.

Between 1974 and 1976, a new cinema, Kino Druzba, was built. It opened on 18th December 1976, with the Soviet film “When September Comes”, starring Armen Dzhigarkhanyan and Nikolay Kryuchkov. There were 320 seats.

In the 1990’s, due to dwindling audiences, a fitness centre was opened alongside the cinema.

In 2000 Dolby stereo SR sound system was implemented. In a 2002 refurbishment the seating capacity was reduced to 242.

A Christie digital DCI projector and DOREMI DCI server were installed from 20th to 29th February 2012, and the sound equipment was extended to 7.1.

The current tenant and operator, TARSTIA, took over about three years ago. The fitness centre has been transformed into a café/bar. Film festivals and other film related civic activities form part of the cinema’s programme. When I visited, in May 2017, I saw “Kinders”, an Austrian documentary about a group of children taking part in a music education programme. This was part of a strand of limited release films; in a nice touch, the screening was introduced by a member of staff.