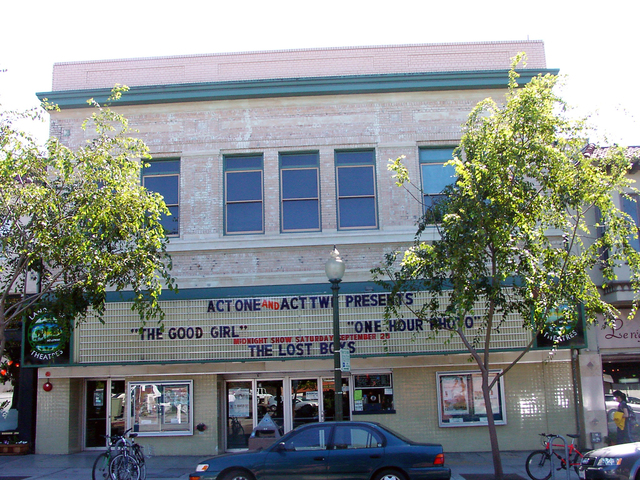 A downtown Berkeley duplex in a building that formerly housed a large restaurant. This theatre opened March 31, 1971 with Walter Matthau in “A New Leaf” showing in both screens. It was well-known as a showcase for independent and foreign cinema until its closure on March 26, 2006.

Today’s The Daily Californian reports that the Act One and Two Theatre will close on Sunday, March 26, 2006. Landmark Theatres was unable to renew the lease at favorable terms

This twin cinema opened in 1971 and Landmark took over operation in 1994. Prior to that I believe it was operated by Pacific. In recent years, the theater was plagued by low attendance and was making only a 2% profit on box office receipts. Its most lucrative showings were weekend midnight screenings of cult films

On a more personal note, I recall seeing Mean Streets here when no one knew from Scorcese. Last Christmas, I saw Neil Jordan’s Breakfast on Pluto.

Which sadly means that Act One & Two’s status should noe read “Closed.”

Another article on the closing View link

I walk by the theater everyday going to and from work. The two Landmark logos on either end of the marquee have been spraypainted over with black paint. Landmark seems to have either tossed or taken everything that was theirs. The dumpsters are gone.

They did put the posters out on Center Street for a couple of hours two Monday’s ago. When it started raining, staff scooped up what was left and dumpstered them. This one’s done and done.

My last view of the Act1-2 was in early 2006—my husband and I were out for a walk around Berkeley, and we explored an unfamiliar alley behind some all-too-familiar buildings. We found an open door with an inviting staircase, and went up, trepidatiously. We slowly climbed the old steps, pausing to admire graffiti drawings along the way, and expecting every moment to be caught and yelled at. At the top of the stairs we found a deserted-but-well-lit hallway, and tiptoed to a door at one end. We tested it gingerly—it swung open to reveal an auditorium full of blue, empty seats. We had walked into the Act 2 theater, just next to the screen. That was our farewell gift from the Act1-2, it turned out. The last movie I saw there was “Schulze Gets the Blues”.

This opened on March 31st, 1971. Grand opening ad in the photo section.