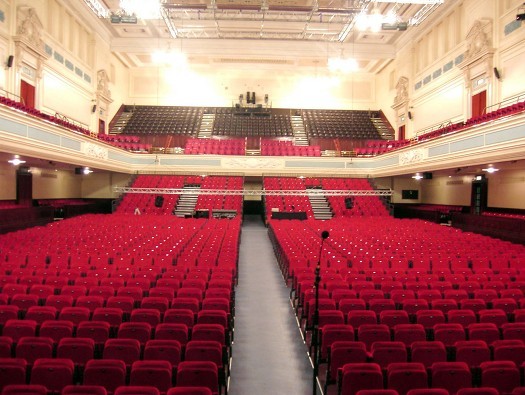 The Caird Hall was built as a concert hall between 1914 (halted due to World War I) and completed in 1923. It was opened by H.R.H Prince of Wales on 26th October 1923. It is equipped with a Harrison & Harrison pipe organ which has 50 speaking stops. It has a built-in Bioscope room for projecting films. William Hamilton’s Diorama was presented in the 1920’s which often presented silent films on a screen stretched across the organ gallery. Film use began intermittently in the early-1930’s and in 1938 a new sound system was installed. It was operated by Pennycook Cinemas Ltd. during World War II. Listed in the 1948 edition of Kinematograph Year Book as the ‘Laird’ Hall Cinema (a misprint).

The organ was renovated in 1991, and the Caird Hall continues to operate as a concert hall, hosting the Royal Scottish National Orchestra and pop music concerts by international artistes and bands.

Caird Hall is designated a Grade A listed status by Historic Scotland.