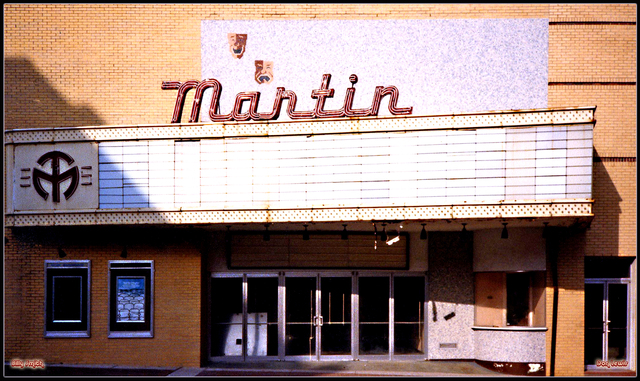 The Tony Theatre opened on Thursday, May 26, 1960. The address changed three times over the years, from 114, to 112, to 116 Washington Street. There was an open house from 7 to 9 on Wednesday May 25, 1960, where admission was free and people were free to tour the theatre and see the projection equipment in action while cartoons and short subjects were continuously played. An RCA engineer was on hand to answer questions about the projection and sound.

The theatre advertised that it had, at that time, Alabama’s largest indoor screen. It also claimed in its ads to have the first traveling-message sign in Hunstville and the first one to be used in the nation for theatre attraction. Other features of the theatre were four-color hand-painted screen curtains, four track stereo sound, and staggered seating vision. The first movie shown at the Tony was “Wild River”.

The theatre became the Martin Theatre on September 19, 1962. The theatre’s last day of business as a movie theatre was August 23, 1982.

A 1986 photograph of the closed Martin Theatre:
View link

Thanks to Jack Coursey for info.

The Martin Theater is now “Sammy T’s Music Hall” and hosts live bands several times weekly. The building has removed all the theater seating and turned the screen area into a medium sized stage.

The entry for James Franklin Scalf in the 1962 edition of the AIA’s American Architects Directory lists the Tony Theatre at Huntsville as one of his projects.

The Martin was across the street from the Lyric. It was not fancy, but it did have the biggest screen in Huntsville until the Madison and the Cinerama opened. In 1966, the admission for first run was $1.00. It was a good place to watch a movie, and it booked some good ones; I especially remember “Patton.”

I came across a circa 1960 photo of an Allison Theatre in Huntsville, but can’t find any record of it’s existence.

DavidZorning: I found a photo of an Allison Theatre in Piedmont, Alabama (not yet listed at Cinema Treasures.) Perhaps your photo’s caption got the town wrong. Does it look like this theater?

Yes that is it. Thanks. It was on Center Avenue. No exact address yet, but I will set up a page for it. Found your above photo in a non Flickr link too. So I can use that as the Overview photo with a link to it’s source. Since my pic is just the marquee off to the side.