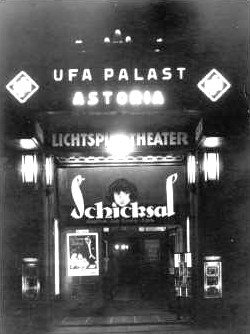 Located in the city centre. The Astoria Lichtspieltheater was opened on 13th November 1912. It was designed by architects P. Grampler & Max Bosenberg.

It was taken over by the Ufa chain in 1924 and renamed Ufa Palast Astoria Lichtspieltheater. It was destroyed by fire, possibly caused by allied bombing on 4th December 1943. The ruins were demolished in the 1960’s and a block of flats now sits on the site.